Possums are nocturnal in nature, so feed between dawn and dusk. They are territorial creatures and can be found alone or in family groups.

The northern brushtail possum breeds year-round, with a gestation period around 17–18 days and pouch period of 4–5 months. It can live up to 15 years.

Many of the NT possums are found to have contracted a flesh eating bacteria. This causes their faces to be eaten away and often results in blindness. The disease has been widely spread within the possum community, also affecting Ringtail possums. Possums brought into the local RSPCA after contracting the disease are commonly put down. Once the possums contract the sickness they are often found to be more welcoming to humans, and will approach when practical. 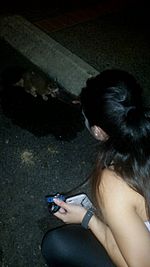 Girl assisting a sick possum with a drink of water

The northern brushtail possum is well adapted to rural and urban areas and is sometimes considered a pest when found in high numbers. Like other possums, it is rather tolerant of humans and can sometimes be hand fed, although it is not encouraged, as its claws are quite sharp and can cause infection or disease to humans if scratched.

It is a traditional food source for some Indigenous Australians. Kunwinjku elders at Kudjekbinj, western Arnhem Land pronounce the name of this animal as djabow. The Bininj Kunwok website record the spelling for this species as djebuyh. According to Reverend P. Nganjmirra, Kunwinjku elder, it tastes "good". It is cooked in a hole like bandicoot.

The northern brushtail possum eats a variety of plant matter, including fruit, leaves, flowers, and seeds. Brushtail possums are known to be tolerant of many plant toxins and can eat tree leaves that other animals find poisonous. Possums also eat insects, moths, grubs, snails, birds’ eggs and babies. Many of the possums' favourite foods are unfortunately found in domestic gardens, drawing the possums into residential yards.

All content from Kiddle encyclopedia articles (including the article images and facts) can be freely used under Attribution-ShareAlike license, unless stated otherwise. Cite this article:
Northern brushtail possum Facts for Kids. Kiddle Encyclopedia.