Logo for the Oyster Festival

The Norwalk Oyster Festival is an annual fair in the city of Norwalk, Connecticut, United States, held on the first weekend after Labor Day in Veterans Park, near Long Island Sound.

Funds raised by the festival help the Norwalk Seaport Association maintain the Sheffield Island Lighthouse as well as develop science education classes. The festival is also used as a fundraiser by more than 20 other local non-profit organizations.

The festival has been run by the Norwalk Seaport Association, a non profit organization, since its inception in 1978. Average annual attendance exceeds 90,000. Each year, the Oyster Festival contributes over $5 million to the local economy.

It features various food, vendors, and entertainment, and celebrates the history of the oyster industry based in Norwalk. In the past, featured performers have included the Village People, Kansas, Charlie Daniels Band, Joe Walsh, Willie Nelson, Blood, Sweat & Tears, Tito Puente, Cheap Trick, Little Feat, The Monkees, Judy Collins, Up with People, and Little Richard.

The 30th annual festival took place September 7 to September 9, 2007 with the Village People heading up the entertainment, the band's third appearance. Jay and the Americans were also booked for the event. 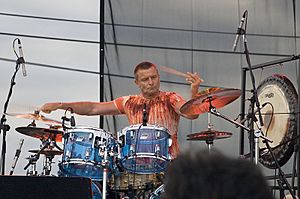 Carl Palmer of Asia at the 29th Norwalk Oyster Festival on September 10, 2006

All content from Kiddle encyclopedia articles (including the article images and facts) can be freely used under Attribution-ShareAlike license, unless stated otherwise. Cite this article:
Norwalk Oyster Festival Facts for Kids. Kiddle Encyclopedia.