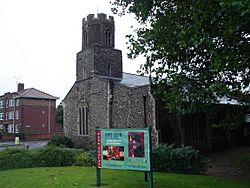 The Norwich Puppet Theatre is a nationally unique venue dedicated to puppetry housed in the medieval church of Saint James the Less a Grade 1 listed building, in the city of Norwich, England.

It currently houses a 165-seat raked auditorium, a 50-seat studio, workshops, an exhibition gallery, a shop and a licensed bar. It is the only theatre in the eastern region of the UK which has a year-round programme of family-centred entertainment. It plays host to a variety of touring companies from the UK and overseas, and provides regular educational workshops for children and adults, as well as training opportunities for theatre practitioners.

The theatre continues to be supported by Norfolk County Council and Norwich City Council along with contributions from foundations including: Garfield Weston Foundation, Geoffrey Watling, Norwich Town Close Estate and the John Jarrold Trust.

Norwich Puppet Theatre was founded in 1979 by Ray and Joan Da Silva as a permanent base for their touring company and was first opened as a public venue on December 1st 1980.

An evening celebration and cabaret night was held on the 4th of December, showcasing a selection of artists and performers from the theatre's 30-year history.

The theatre is also the base for the Norwich Puppet Theatre Company which creates and presents its own productions, touring to schools and venues throughout the UK as well as international venues and festivals. Following a period of hiatus due to the loss of artistic director in 2008, the company returned in 2010 with a new production in collaboration with theatre company indefiniteArticles, entitled The Chalk Giants.

The company's work is informed by concepts and techniques from a range of cultures, and encourages the exchange of ideas by hosting companies and individuals of differing nationalities and by presenting its own work abroad. This has included performances in Canada, Finland, Spain, Mexico, and Slovenia.

The theatre aims to develop a public taste for the artform of puppet theatre rather than follow a fashion or present shows purely for commercial reasons, maintaining a dialogue with, and breaking down barriers between, different artforms particularly in relation to the combination of puppet theatre and live music. The theatre works with a wide range of techniques including rod, glove, shadow, objects, toys and masks, developing and exploring each technique individually and in combination with one another.

All content from Kiddle encyclopedia articles (including the article images and facts) can be freely used under Attribution-ShareAlike license, unless stated otherwise. Cite this article:
Norwich Puppet Theatre Facts for Kids. Kiddle Encyclopedia.