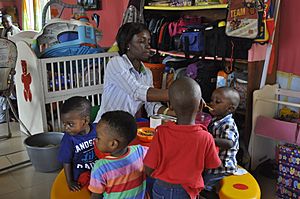 A nursery is a school for children between the ages of one and five years. It is a preschool education institution, part of a child's education.

A nursery in England is also called FS1, which is also first year of foundation before they go into primary school.

Nursery kindergarten (children's garden), is a name given by Friedrich Fröbel, who created the Nurseru in Germany, in 1837. Other common names are pre-school, playschool and playgroup. The German word Kindergarten is also used in many non-English-speaking countries to denote a form of pre-school education. However, in the United States, Canada, and some parts of Australia, kindergarten is instead the term used to describe the first year of compulsory schooling. The word kindergarten is not generally used in the UK.

All content from Kiddle encyclopedia articles (including the article images and facts) can be freely used under Attribution-ShareAlike license, unless stated otherwise. Cite this article:
Nursery Facts for Kids. Kiddle Encyclopedia.