It is built on former industrial docklands on the north side of the city at the edge of the boundary between formerly separate ports of Newhaven and Leith. The land was formerly occupied by the Henry Robb shipyard, which closed in 1983. Since then, the entire area has undergone urban renewal and regeneration, much led by and on the lands in the ownership of Forth Ports and its predecessors.

These and other developments have played key parts in the regeneration of Leith. The now-decommissioned Royal Yacht Britannia, which is accessed via the Britannia Visitor Centre within Ocean Terminal, is permanently berthed next to the building and can be viewed from the centre. 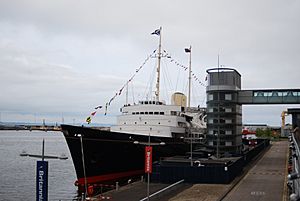 The berth currently occupied by Britannia was originally planned to handle cruise liners. As Britannia is now permanently moored alongside the Ocean Terminal, Forth Ports Plc plan to build another terminal for cruise liners.

Bhs and Debenhams are the Terminal's main shops; in total there are some 85 shops, 6 restaurants, 3 coffee shops, a variety of bars and cafés, as well as a cinema Vue and a day spa.

There is car parking and the centre is served by Lothian Buses services 11, 22, 34, 35 and 36. It also has bus links toFife on Stagecoach's 50 peak services. The centre was to be served by the Edinburgh Trams at Ocean Terminal tram stop until the tram line east of St. Andrew's Square was cancelled in June 2011.

A proposal to extend Ocean Terminal by building a new wing built on land reclaimed from the port has already been mooted.

All content from Kiddle encyclopedia articles (including the article images and facts) can be freely used under Attribution-ShareAlike license, unless stated otherwise. Cite this article:
Ocean Terminal, Edinburgh Facts for Kids. Kiddle Encyclopedia.