It portrays the settlement era of Gippsland from the 1850s through to the 1950s.

Set in three hectares of parkland, the Park is now visited by over 100,000 people each year. 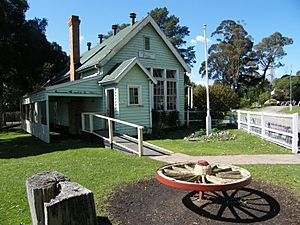 The park was established in late 1967 by the City of Moe Development Association. It was laid out by architect Fritz Suendermann. It opened as the Gippsland Folk Museum in 1973 and was later renamed Old Gippstown. Officially opened in 1973, Old Gippstown provides large-scale exhibits illustrating the history of the Gippsland region. In the 1990s the park came under the authority of the Department of Sustainability and Environment, and the collection is owned by the state of Victoria.

Today, Old Gippstown is owned by the Gippsland Reserve Board of Management, a group of volunteers who oversee the operations and strategy of the Park. The park is mostly staffed by volunteers who work to maintain the ever-expanding collections of artefacts, vehicles and buildings that typify the heritage of the Gippsland area.

Old Gippstown has over forty historical buildings, mostly dating from the mid-19th century to the early 20th century. 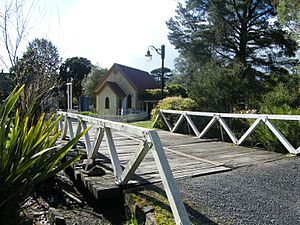 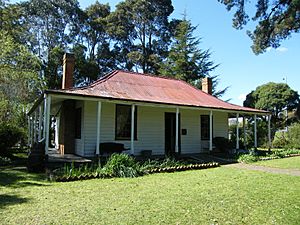 The extensive historical collection on display at the park comprises various antiques, artwork, books and papers, the largest publicly owned collection of horse-drawn vehicles, machinery, tools, and a wide range of unique and forgotten devices all representing the pioneer era in Gippsland. There is also a display of military antiques from the first and second world wars.

A large number of events are held at Old Gippstown throughout the year, including Australia Day, the Moe Jazz Festival, Mothers Day High Tea, Halloween, Australia's Biggest Morning Tea, Carols by Candlelight, Father's Day Car Show, music events and a monthly market among others. In addition, the Park grounds and its Function Rooms are frequently hired for weddings, reunions and other special occasions.

Groups which use Old Gippstown

Old Gippstown is used by a broad range of community groups, including those doing yoga, crafts, arts, car clubs and more. In addition it is the meeting place for the Masonic Lodge and the local Woodworkers Club. Many school groups also regularly take excursions to Old Gippstown, and the Park's function rooms are often hired out to training organisations and other local businesses who wish to make use of the space available and the easy-to-reach location.

All content from Kiddle encyclopedia articles (including the article images and facts) can be freely used under Attribution-ShareAlike license, unless stated otherwise. Cite this article:
Old Gippstown Facts for Kids. Kiddle Encyclopedia.