Olearia argophylla is a species of flowering plant in the family Asteraceae. Its common names are musk daisybush, musktree, muskwood and silvershrub. It is found in Australia, specifically in New South Wales, Tasmania and Victoria. It grows as a tall shrub or tree characteristic of wet sclerophyll forest. Its leaves are large and broad (6–15 cm x 2–5 cm), coarsely toothed, green on top and silver-white underneath. The grain of the wood is mainly straight, but burls near the base of the tree are prized for their brown swirls that often suggest the appearance of small faces or animals peering out of the wood, making them highly sought after by woodworkers.

Olearia argopylla is an open to dense, medium to tall shrub or small tree (3-15m x 2-6m). Its bark is grey, fissured to ribbony, flaky and its branchlets covered in dense silvery hairs. It has large, alternate, ovate to broadly elliptic, shiny dark-green leaves with a silvery underside 6–15 cm long x 2–7 cm wide, often (but not always) with slightly serrated margins and roughly 25mm petiole. It has many pseudanthium 12-27mm in diameter, with 3-8 white ray florets and 3-8 yellow disc florets arranged in large terminal bunches. Flowers mainly between September–April. 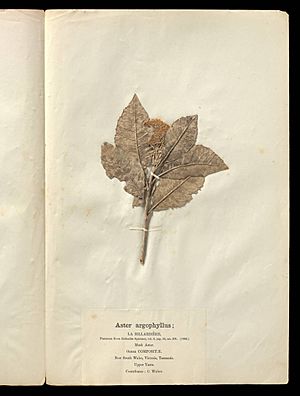 The first occurrence of Olearia argophylla was published in Flora Australiensis vol. 3. There are records, however, of earlier discovery of the plant under the synonym Eurybia argophylla in the French Dictionnaire des Sciences Naturelles [1] Edn. 2, 37: 487 which dates back to 1825, and even earlier in Novae Hollandiae Plantarum Specimen 2(20-21) under the synonym Aster argophyllus (1806).

Olearia argophylla can be propagated from seed, or sometimes from cuttings. It may be suitable as a screen or windbreak plant under established trees. Prefers moist well drained soils that are neutral or slightly acidic. It prefers partial to full shade and is frost tolerant.

All content from Kiddle encyclopedia articles (including the article images and facts) can be freely used under Attribution-ShareAlike license, unless stated otherwise. Cite this article:
Olearia argophylla Facts for Kids. Kiddle Encyclopedia.