Olearia elliptica, commonly known as the sticky daisy bush, is a shrub in the daisy family, Asteraceae and is native to New South Wales and Queensland in eastern Australia. It has scattered, sticky leaves and white flowers in summer and autumn. 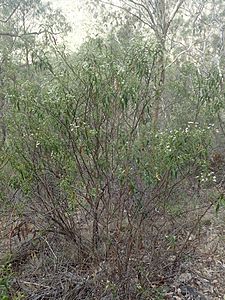 Olearia elliptica was first formally described in 1836 by Augustin Pyramus de Candolle who published the description in his 17-volume treatise, Prodromus Systematis Naturalis Regni Vegetabilis. The specific epithet (elliptica) is a Latin word meaning "a defective circle" or "an ellipse".

In 1993, Peter Shaw Green described two subspecies of O. elliptica that have been accepted by the Australian Plant Census:

Subspecies elliptica occurs from Berry northwards along central and eastern New South Wales to the Queensland border. It is found in areas of annual rainfall of over 900 mm in the Sydney Basin.

All content from Kiddle encyclopedia articles (including the article images and facts) can be freely used under Attribution-ShareAlike license, unless stated otherwise. Cite this article:
Olearia elliptica Facts for Kids. Kiddle Encyclopedia.