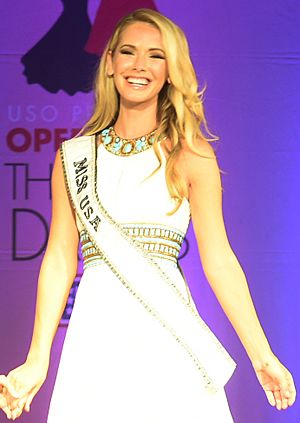 Olivia Jordan Thomas (born September 28, 1988) is an American model, actress, TV show host and beauty pageant titleholder from Oklahoma who won Miss USA 2015 and also finished 3rd in Miss Universe 2015. She was the first Oklahoman to be crowned Miss USA.

She was born to Bob and Jill Thomas on September 28, 1988, in Tulsa, Oklahoma. After her high school graduation, she went to Boston to attend Boston University. She graduated in May 2011, with a Bachelor of Science in Health Sciences.

Jordan soon joined the SAG and adopted the name Olivia Jordan. She moved to Los Angeles, California, to do modeling and acting after college. She acted in the movie Ted during college, and later acted in several other films.

In 2018, she became engaged to actor Jay Hector. They married on November 8, 2019, in Palm Springs, California.

All content from Kiddle encyclopedia articles (including the article images and facts) can be freely used under Attribution-ShareAlike license, unless stated otherwise. Cite this article:
Olivia Jordan Facts for Kids. Kiddle Encyclopedia.