Ong's Hat (also Ong) is a ghost town in Pemberton Township, Burlington County, New Jersey, United States. It is located on Magnolia Road (County Route 644) west of the Four Mile Circle, where New Jersey Route 72 intersects with New Jersey Route 70. It is the northern terminus of the Batona Trail.

Although it was never more than one hut ("Ong's Hut") it still appeared on some maps as of 2006. A road in the area is named Ong's Hat Road. It is also called the Buddtown-Ong's Hat Road. It was completed in 1929, replacing an earlier dirt path.

Tha name of the place may have originally been Ong's Hut, referring to an overnight shelter built by a farmer of that name; see below.

A well-known folk story attributes the name to a local man who was a fixture at local dances, wooing women with his suave attire, especially his silk hat. The surname Ong was common among early Pine Barrens settlers, and one of the earliest settlers was named Jacob Ong. One story of the origin of the name is that at one such dance, a jealous lover stomped on his hat, ruining it, and in frustration Ong tossed it in the air, where it caught on a high branch of a pine tree. The hat remained there for many years, serving as landmark which identified the small village. At least four other versions of this legend circulate. One version simply ends with his hat being stomped on, the most widely circulated one ends with him throwing it in the tree. The other two hold that Ong was a tavern keeper who either painted a silk hat on his sign or threw his hat into a tree after getting angry with a woman.

The name of the area predates the revolutionary war. The location "Ong's" appears on a 1778 map of Hessian encampments in New Jersey. According to Forgotten Towns of Southern New Jersey by Henry Charlton Beck, Ong's Hat was a real village. According to Beck, around the 1860s, Ong's Hat was a lively town and served as a social center for the surrounding area. It was known for the availability of alcohol and one of the first arrests of a bootlegger occurred at Ong's Hat. Prizefighting was also popular. 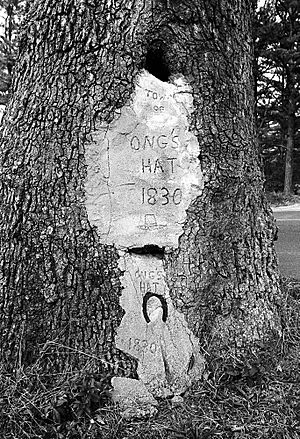 Beck says that a Polish couple, the Chininiskis, moved to Ong's Hat in the early 20th century. By that time only seven residents remained. The Chininiskis disappeared soon after. Years later, hunters found a female skeleton at Ong's Hat, which police speculated was that of Mrs. Chininiski. Tracking Mr. Chininiski to New York but unable to prove anything, Burlington County Sheriff Ellis Parker kept the skull in his office for many years as a reminder of the unsolved case.

By 1936, Ong's Hat was still on maps but nothing was there except a clearing, an abandoned shed, and bits of brick and roofing suggesting houses had once been there. When Beck visited he found only Eli Freed, a 79-year-old farmer who moved to the area from Chicago. In the foreword to the 1961 edition of the book, Beck reports that Freed no longer lived at Ong's Hat and that additional legends concerning the village had emerged.

A 1968 letter published in the New York Times, written by an Ong family descendant, claims reports of an actual town are a misnomer. Instead, he says his ancestors lived in Little Egg Harbor in the early 17th century and transported their grain to Burlington, New Jersey, for grinding. They built a hut midway through the route where they could rest overnight, and according to the letter the name Ong's Hut was added to maps and gradually corrupted to Ong's Hat.

In his 1944 book, Jersey Genesis, Beck himself says in reporting on Ong's Hat he fell for "elaborate traps" and that the story he had earlier repeated was a "fairy tale". He then subscribes to the explanation that the name is a corruption of Ong's Hut, a stopover point for a farmer from Little Egg Harbor.

As a long-abandoned small settlement, Ong's Hat remained obscure until its name and location was co-opted in a book called Ong's Hat: The Beginning by Joseph Matheny, which was based on stories that had circulated on computer bulletin boards which held that a cult of outcast scientists opened an interdimensional gateway in Ong's Hat. Matheny was not clear as to whether his book was intended as fact or fiction.

Ong's Hat was also the name of a diner located in the vicinity of this town. The diner was in operation from the early 1980s to the 1990s. The diner was refurbished and eventually reopened under a different name. Visitors to the Ong's Hat Diner may recall that a branch with a top hat perched in one of its boughs adorned its ceiling.

Ong's Hat appeared in an episode of Yours Truly, Johnny Dollar.

All content from Kiddle encyclopedia articles (including the article images and facts) can be freely used under Attribution-ShareAlike license, unless stated otherwise. Cite this article:
Ong's Hat, New Jersey Facts for Kids. Kiddle Encyclopedia.