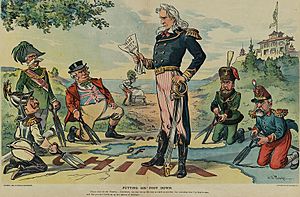 The Open Door Policy was a policy between China, the United States and several nations in Europe. It opened trade with China to each of these nations. Prior to that, China was a closed country. Europe was about to fight a war to open up China by force. This grew out of the Open Door Notes sent by United States Secretary of State John Hay to diplomats in Europe.

All content from Kiddle encyclopedia articles (including the article images and facts) can be freely used under Attribution-ShareAlike license, unless stated otherwise. Cite this article:
Open Door Policy Facts for Kids. Kiddle Encyclopedia.