Orchestra Hall is an elaborate concert hall in the United States, located at 3711 Woodward Avenue in Midtown Detroit, Michigan. The hall is renowned for its superior acoustic properties and serves as the home of the internationally known Detroit Symphony Orchestra (DSO), the fourth oldest orchestra in the United States. With the creation of an adjoining auditorium for jazz and chamber music in 2003, Orchestra Hall became part of the Max M. and Marjorie S. Fisher Music Center. It was listed on the National Register of Historic Places in 1971.

The Detroit Symphony Orchestra had previously played at the old Detroit Opera House. However, Ossip Gabrilowitsch demanded that the DSO build a suitable auditorium before he assumed his position as music director. Construction on Orchestra Hall began on June 6, 1919, and was completed in barely six months.

The 2,014-seat hall was designed by the noted theater architect, C. Howard Crane. The first concert took place on October 23, 1919 and the hall remained the home of the Detroit Symphony Orchestra until 1939. Due to the financial difficulties of the Great Depression, the orchestra was compelled to leave Orchestra Hall and enter into a more economical arrangement to share the Masonic Temple Theatre. Orchestra Hall was vacant for two years until it was purchased by new owners. For ten years Orchestra Hall presented jazz artists under the name Paradise Theater, opening on Christmas Eve 1941. The Paradise hosted the most renowned jazz musicians, including Ella Fitzgerald, Billie Holiday, Count Basie, and Duke Ellington. 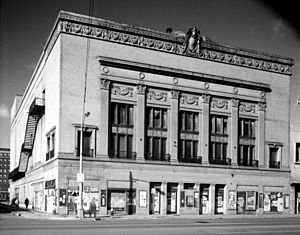 The Paradise closed in 1951 and now Orchestra Hall sat vacant for nearly twenty years until the late 1960s when it was slated for demolition and the land used to construct a restaurant. Paul Ganson, the assistant principal bassoonist of the DSO, spearheaded a movement to rediscover the hall and raise funds to restore it. Renovation work started in 1970 and continued for about two decades, costing roughly $6.8 million. The original building required extensive renovations including: a new stage, all new seating, plaster and lath work, and restoration of historical decorations. All of the restoration work was completed with the goal of maintaining the fine acoustic properties that the hall was historically known for. The hall was added to the National Register of Historic Places in 1971. The DSO moved back into Orchestra Hall in 1989.

Additional work on the hall was done in the summer months of 2002 and 2003 as part of the creation of the new Max M. and Marjorie S. Fisher Music Center, or "the MAX", as it is known. The work included renovations to the original facility as well as an expansion which houses additional lobbies and reception areas, dressing rooms and storage facilities, rehearsal space and a 450-seat venue for more intimate performances.

The mayor of Detroit delivers the annual State of the City address at Orchestra Hall.

All content from Kiddle encyclopedia articles (including the article images and facts) can be freely used under Attribution-ShareAlike license, unless stated otherwise. Cite this article:
Orchestra Hall (Detroit) Facts for Kids. Kiddle Encyclopedia.