The Detroit Masonic Temple is the world's largest Masonic Temple. Located in the Cass Corridor of Detroit, Michigan, at 500 Temple Street, the building serves as a home to various masonic organizations including the York Rite Sovereign College of North America. The building contains a variety of public spaces including three theaters, three ballrooms and banquet halls, and a 160 by 100 feet (49 m × 30 m) clear-span drill hall.

Recreational facilities include a swimming pool, handball court, gymnasium, bowling alley, and a pool hall. The building includes numerous lodge rooms, offices, and dining spaces, as well as a hotel section. Although the hotel rooms are available to any noble of the mystic shrine or blue lodge mason, none are currently in usable condition. Architect George D. Mason designed the whole structure as well as the Masonic Temple Theatre, a venue for concerts, Broadway shows, and other special events in the Detroit Theater District. It contains a 55-by-100-foot (17 m × 30 m) stage, one of the largest in the country.

The Detroit Masonic Temple was designed in the neo-gothic architectural style, using a great deal of limestone. The ritual building features 16 floors, stands 210 feet (64 m) tall, with 1,037 rooms. It dominates the skyline in an area known as Cass Corridor, across Temple Street from Cass Park, and Cass Technical High School. It is within walking distance of the Little Caesars Arena and the MotorCity Casino Hotel. 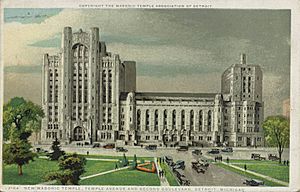 The Masonic Temple Association was incorporated in Detroit in 1894. It moved into its first temple, on Lafayette Boulevard at First Street, in 1896. Outgrowing these quarters, the Association purchased land on Bagg Street (now Temple Avenue) to build a new temple that would also include a public theater. Fund-raising for construction of the building raised $2.5 million (equivalent to $26.59 million in 2018), and ground-breaking took place on Thanksgiving Day, 1920. The cornerstone was placed on September 19, 1922, using the same trowel that George Washington had used to set the cornerstone of the United States Capitol in Washington D.C.. The building was dedicated on Thanksgiving Day, 1926.

The horseshoe-shaped auditorium originally had a capacity of 5,000. Due to poor sight lines along the sides of the stage, nearly 600 seats were removed (or never used), reducing maximum seating to 4,404.

It was listed on the National Register of Historic Places in 1980, and is part of the Cass Park Historic District, which was established in 2005.

In April 2013, the building was reported to be in foreclosure over $152,000 in back taxes owed to Wayne County. The debt was paid off in May 2013, and in June 2013, it was revealed that $142,000 of the bill was footed by singer-songwriter Jack White, a Detroit native known for his work with The White Stripes. He wanted to help the temple in its time of need as they had helped his mother in a time of need: the temple gave her a job as an usher in the theater when she was struggling to find work. In response, the Detroit Masonic Temple Association renamed its Scottish Rite cathedral the Jack White Theater. 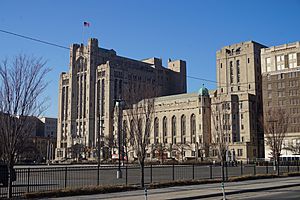 The Detroit Masonic Temple has been the largest Masonic Temple in the world since 1939, when the Chicago Masonic Temple was demolished. The stage of the auditorium is the second largest in the United States, having a width between walls of 100 feet (30 m) and a depth from the curtain line of 55 feet (17 m).

The large complex includes a 16-story 210-foot (64 m) ritual building connected to a 10-story wing for the Ancient Arabic Order of the Nobles of the Mystic Shrine, now known as Shriners International, by the 7-story Auditorium Building. In between these areas are a 1,586-seat Scottish Rite Cathedral, and a 17,500-square-foot (1,630 m2) drill hall used for trade shows and conventions. The drill hall is also home to Detroit Roller Derby. The drill hall has a floating floor, where the entire floor is laid on felt cushions. This type of construction, also known as a sprung floor, provides 'give' to the floor which tends to relieve the marchers.

The building houses two ballrooms: the Crystal Ballroom; and the Fountain Ballroom, the latter of which measures 17,264 square feet (1,603.9 m2) and accommodates up to 1,000 people. An unfinished theatre located in the top floor of the tower would have seated about 700.

Seven "Craft Lodge Rooms" all have different decorative treatments, the motifs of decoration being taken from the Egyptian, Doric, Ionic, Corinthian, Italian Renaissance, Byzantine, Gothic, and Romanesque styles. All of the artwork throughout the building, especially the decorated ceilings, was done under the direction of Italian artists. The building includes Royal Arch room, as well as a Commandery Asylum for the Knights Templar.

Architect George D. Mason designed the theatre, which contains a 55-foot-by-100-foot (17 x 30 m) stage. Detroit Masonic Temple was designed in the neo-gothic architectural style, and is faced with Indiana limestone. Although few Masonic buildings are in the Gothic style, the architect believed that Gothic best exemplified Masonic traditions.

Much of the stone, plaster, and metal work in the interior of the building was designed and executed by architectural sculptor Corrado Parducci. The three figures over the main entrance were by Leo Friedlander, while the rest of the considerable architectural sculpture on the exterior was by Bill Gehrke.

All content from Kiddle encyclopedia articles (including the article images and facts) can be freely used under Attribution-ShareAlike license, unless stated otherwise. Cite this article:
Detroit Masonic Temple Facts for Kids. Kiddle Encyclopedia.