The area surrounding Cass Park was originally laid out as part of a French ribbon farm extending from the Detroit River. Lewis Cass, the park's namesake, purchased the farm in 1816 when he moved to the area. He constructed a house on Larned Street between First and Second Avenues, and in 1840 a larger house on the northwest corner of Fort and Cass Streets. Starting in 1836, Cass began subdividing his land, platting lots between Larned and the river. Over the next 30 years, Cass platted more northerly sections of his claim. The area that now encompasses the Cass Park Historic District began to be sold as lots after 1859. In 1860, Cass deeded a section of land to the city of Detroit, bounded by Second, Ledyard, Cass and Bagg (now Temple), to be used as a public park.

In 1863, the Detroit City Railway Company began streetcar service Along Woodward Avenue, only a few blocks away from Cass Park. The streetcar service spurred development northward along Woodward, including the Cass Park area. The area soon became a fashionable suburb of the city. In 1875, the city landscaped Cass Park, planting a number of new trees. By the 1880s, some of Detroit's most prominent citizens lived along the park, including James Vernor, E. W. Voigt, and John H. Avery. Avery's house at 457 Ledyard is the only residence remaining from this period within the district.

The Cass Park area continued to be a fashionable address into the 1900s. However, the 1890s saw the introduction of upscale apartment buildings. In 1895, the Alhambra Flats at 100–112 Temple was constructed, followed in 1905 by the Cromwell Flats at 2942 Second, and in 1908 by the Ansonia Flats at 2909 Second. As Detrtoit continued developing, apartment buildings with smaller but more numerous units began to appear, including the Manhattan Apartments at 2966 Second in 1905, and the Altadena Apartments at 2952 Second in 1911. This marked a transformation of the Cass Park area, as the single family homes surrounding the park were replaced with apartment buildings to house the city's expanding population. By 1925, a number of new apartment buildings had been constructed.

In addition, by the early 1920s, the business development of the city center reached into the Cass Park area, with businesses constructing their headquarters near the park. The first one of these was the Standard Accident Insurance Company, who built their headquarters at 640 Temple in 1921. Also by 1920, the city's Freemasonry had purchased a plot of land on what is now Temple Avenue to construct a new building, replacing the lodge on Lafayette which the organizations had outgrown. Construction on the Detroit Masonic Temple, the largest building in the district, began in 1920 and was completed in 1926. The Knights of Pythias followed suit, building a headquarters adjacent to the Masonic Temple in 1926. In 1927, the S. S. Kresge Corporation built its World Headquarters along the park.

Smaller businesses located along the more heavily traveled Cass Avenue near the Park. A number of structures were constructed in this area, including a commercial buildinghousing the Lasky Corporation at 146–166 Temple in 1923, the Will Mar Garage at 131 Temple in 1924, and a film exchange building at 479 Ledyard in 1936. During World War II the city's exploding population caused apartment owners in the area to subdivide their units to house the influx of workers.

After the war, the Cass Park area declined economically, with the apartment buildings being further divided into substandard units. Many buildings fell into disrepair or were abandoned. During the 1950s-1970s the Cass Park area became one of the most economically depressed neighborhoods of the city, and a number of charitable organizations moved into the area. In 1955, the Episcopal Diocese of Detroit constructed the Mariners Inn at 445 Ledyard as a shelter and treatment center for alcoholic sailors. The construction of Interstate 75 in Michigan, cutting off the park from downtown, hastened the decline of the neighborhood. Businesses moved into the suburbs, and the buildings left behind were taken over by nonprofit organizations, abandoned, or razed. 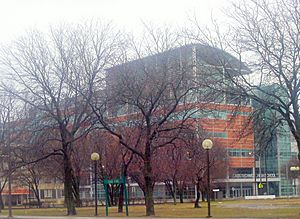 Cass Tech from across Cass Park

The Cass Park Historic District includes Cass Park, a formal square with angled paths and scattered statues, as well as various commercial headquarters buildings, apartment buildings, the monumental Detroit Masonic Temple and other structures surrounding the park. Cass Park is a landscaped green space, containing abundant trees, park benches and modern, multi-color playground equipment. A fountain was once in the center of the park. A statue of Robert Burns, sculpted by George Anderson Lawson in 1921, is located at the north side of the park, facing the Masonic Temple. The new Cass Technical High School is located just to the south of the park, and various other buildings, all of which are contained within this historic district, surround and frame the park space.

The national designation includes 25 buildings, two of which are demolished (the Adams Apartments and Williams Apartments) and two of which are classified as non-contributing to the district (Park Plaza and the Cass Park Baptist Center). The city of Detroit designation includes 19 of the 25 buildings included in the national designation, excepting the four demolished and non-contributing structures, as well as the Mariners Inn and the Will Mar Garage. Two of the buildings in the district (the S.S. Kresge Company Headquarters and the Detroit Masonic Temple) are individually listed on the National Register of Historic Places.

The buildings in the district include: 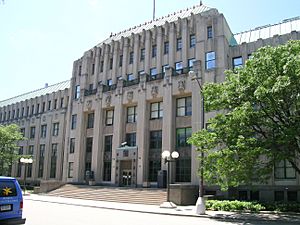 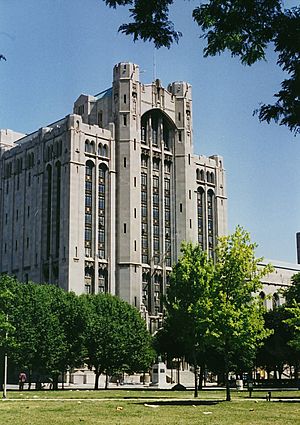 On / East of Cass Avenue

All content from Kiddle encyclopedia articles (including the article images and facts) can be freely used under Attribution-ShareAlike license, unless stated otherwise. Cite this article:
Cass Park Historic District Facts for Kids. Kiddle Encyclopedia.