Orchis militaris Poir. is a synonym of Orchis italica.

Orchis militaris, the military orchid, is a species of orchid native to Europe. It is the type species of the genus Orchis. 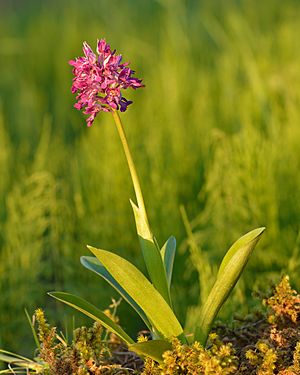 This plant grows to a height of 20 to 50 cm with a robust stem with rather drawn up oblong basal leaves. The inflorescence forms a purplish dense cone consisting of from 10 to 40 flowers. In each flower the sepals and side petals are gathered together to form a pointed "helmet" (whence it gets its name), a lilac colour outside and a veined purple colour inside. The central tongue finishes in two lobes separated by a tooth.

Depending on location, April to June.

Likes full light on a dry calcareous substrate. For example, unfertilized lawns, meadows, edges and light woods up to 2000m in altitude.

It is well distributed around Europe, reaching as far north as southern Sweden, but rather rare in the Mediterranean areas.

It is extremely rare in Britain and a protected species, occurring only at the Rex Graham nature reserve in Suffolk and the Buckinghamshire Chilterns.

Orchis militaris contains the nutritious polysaccharide glucomannan, and is one of the original species of orchid whose ground-up roots are used to make the drink salep.

Orchinol is a phenanthrenoid that can be isolated from infected O. militaris.

All content from Kiddle encyclopedia articles (including the article images and facts) can be freely used under Attribution-ShareAlike license, unless stated otherwise. Cite this article:
Military orchid Facts for Kids. Kiddle Encyclopedia.