The Oregon Convention Center is a convention center in Portland, Oregon. Completed in 1989 and opened in 1990, it is located on the east side of the Willamette River in the Lloyd District neighborhood. It is best known for the twin spire towers, which provide light into the building's interior and for housing the world's largest Foucault pendulum. The center is owned by Metro, the Portland area's regional government, and operated by the Metropolitan Exposition and Recreation Commission.

The building was designed by the architectural firm of Zimmer Gunsul Frasca Architects (ZGF). It is the largest convention center in Oregon, at nearly 1 million square feet (93,000 m2). The complex includes 255,000 square feet (23,700 m2) of exhibit space. It features the largest ballroom in the City of Portland at 35,000 square feet (3,300 m2). The original building was built in the late 1980s, opened in 1990, and was expanded in 2003. ZGF was also involved in designing the expansion. More recently, the building has become known for upward illuminating the twin spires yearly on September 11 in memorial of the events of 9/11. In 2008, the OCC replaced its traditional Wi-Fi Hotspots with Wi-Fi Arrays to provide wireless internet services which are sold to exhibitors and attendees. 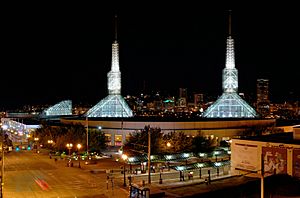 The building and grounds also have an extensive set of public art, with works from over two dozen mainly Pacific Northwest artists. The collection includes paintings, plaques, glass and ceramic tiles, sconces, mosaics, bells, and parts of a large Douglas fir. Each of the towers has a focal point artwork, with a colorful 40-foot-long Chinese dragon boat suspended in the east tower, and Principia by Jones/Ginzel, a dramatic Foucault pendulum hanging over a gilded halo of rays and an inlaid fantasy solar system in the floor of the north tower.

The region's light rail system, TriMet's MAX, serves the center with a station on Holladay Street. The Portland Streetcar system began serving the center in 2012, with the opening of a new line called the CL Line; this was renamed the Loop Service in 2015. TriMet bus route 6 also serves the facility.

Construction on a 30,000-square-foot (2,800 m2), full-block "outdoor plaza" facility for convention-related activities started in 2011 across the street from the center, to the east. The plaza, known as the Oregon Convention Center Plaza, opened in January 2012.

Metro has proposed a 600-room hotel adjacent to the Convention Center, to be built by Mortenson Construction, then owned and operated as a Hyatt Regency. The $212 million hotel would be partially paid for by Metro using $60 million in revenue bonds and $18 million from Oregon Lottery funds, loans, and grants. The plan has attracted criticism from existing hoteliers as being an unfair subsidy, while Metro has championed it as a way to attract larger conventions. Suits from opponents were rejected in county courts, and in May 2015, the Oregon Legislature authorized Metro to issue the bonds. Construction of the Hyatt Regency Portland began in 2017, and the hotel opened in December 2019.

The convention center was chosen as the host venue for the 2016 IAAF World Indoor Championships after Portland won their bid over Birmingham, England. For the event, the building was fitted with a 200m track and seating for 8,000 spectators.

On March 20, 2020, amidst the 2019–20 coronavirus pandemic, the center was turned into a Portland's second temporary shelter for the homeless population of the city in order to protect them from being infected by COVID-19. The shelter will cease to exist when Governor Kate Brown lifts the ban on large public gatherings.

All content from Kiddle encyclopedia articles (including the article images and facts) can be freely used under Attribution-ShareAlike license, unless stated otherwise. Cite this article:
Oregon Convention Center Facts for Kids. Kiddle Encyclopedia.