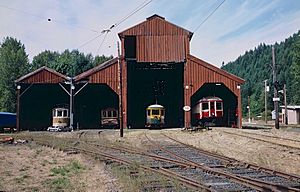 The original museum opened in Glenwood, about 40 miles (64 km) west of Portland, in 1959, with the first operation of streetcars taking place in 1963 and regular operation in 1966. It was named Trolley Park or, more commonly, the Trolley Park, but its formal name in later years was the same as that of the present museum. The Glenwood museum was built on the site of a former steam logging railroad, and OERHS re-equipped the former sawmill building of the Consolidated Timber Company as a four-track carbarn. The museum property occupied about 26 acres (11 ha), and trolley cars were able to operate on a 1.7-mile (2.7 km) line.

Operation at the Glenwood site ended in autumn 1995. 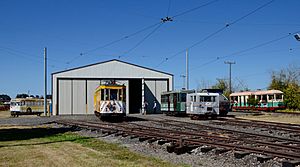 The current museum opened in Brooks in 1996. The museum consists of about one mile of mainline track with overhead wire. There is a four-track carbarn to store the international collection of streetcars.

The museum is open from May through October with trolley operations on Saturdays. The big event of the year is the annual Steam-Up, held on the last weekend of July and the first weekend of August. Thousands of riders use the trolley during these two weekends.

All content from Kiddle encyclopedia articles (including the article images and facts) can be freely used under Attribution-ShareAlike license, unless stated otherwise. Cite this article:
Oregon Electric Railway Museum Facts for Kids. Kiddle Encyclopedia.