The Oregon State Fair is the official state fair of the U.S. state of Oregon. It takes place every August–September at the 185-acre (0.75 km2) Oregon State Fairgrounds located in north Salem, the state capital, as it has almost every year since 1862. In 2006, responsibility for running the fair was delegated to the Oregon State Parks and Recreation Department, and the division is now known as the Oregon State Fair & Exposition Center (OSFEC), which holds events on the fairgrounds year-round.

As Oregon agriculture expanded in the early 19th century many communities formed agricultural associations for the purpose of sharing information on farming practices and resources. These groups began to organize county fairs such as the Yamhill County Fair (1850). Shortly thereafter the Oregon Farmer newspaper began calling for a statewide fair. A group of farmers known as the Oregon Fruitgrowers Association organized the first unofficial state fair in 1858. That year is recognized as the official anniversary year of the fair.

In 1860, the association merged with other county groups and became the Oregon State Agricultural Society, who held the first official fair in 1861 in the Gladstone/Oregon City area. It was felt a larger area was needed and following a proposal by the Marion County Agriculture Society, the second official state fair was held in Salem in 1862 on the grounds of the Marion County Fair, where it has remained ever since. Homesteader John Savage donated 8 acres (32,000 m2) of his land, which was three miles (5 km) outside of Salem at the time, while pioneer John Minto contributed $1,200 to build a wooden fence around the grounds. The fairgrounds were annexed into Salem in 1921.

The fair has been held every year on the same site, except in 1905, because the Lewis and Clark Centennial Exposition was taking place in Portland that year, and during the World War II years of 1943 and 1944; instead the fairgrounds were leased to military units as a place to bivouac. Also, although the 1942 fair was held, it was scaled back to only include 4-H displays, livestock exhibits, and displays from 27 Oregon counties, so it was not considered an official State Fair. The fair was also canceled in 2020 due to the COVID-19 pandemic.

In 1967, an arson occurred just before the opening of the fair, burning several large structures. Along with the fair commissioners, Governor Tom McCall felt the fair should go on, so many groups donated time and money for the cleanup and sent facilities like tents from as far away as the Portland Rose Festival so the fair could open.

The state fairground is the site of two historic buildings listed on the National Register of Historic Places: the Oregon State Fair Stadium and Poultry Building Ensemble. The 1919 horse stadium and the 1921 poultry building were added to the register in 2002. The poultry building is known for the "chicken head" relief sculptures that decorate the exterior. The horse stadium is the oldest state building in Oregon in continuous use. 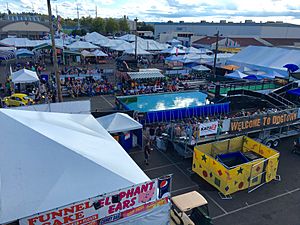 In 2007, a 200-year-old grove of Oregon White Oaks across the street from the main fairgrounds was designated by the Oregon Heritage Tree Committee as an Oregon Heritage Tree site. The grove was used as a camping and gathering place by the area's original inhabitants, the Kalapuya, who collected acorns and camas there. The site later became a camping place for fairgoers who originally arrived in wagons and created a tent city during the fair; the practice of camping in the grove continued into modern times.

Following a period of financial trouble, the Oregon Legislative Assembly directed the Oregon Parks and Recreation Department to take over management of the fair in 2006. As of 2008, the fair's slogan was: "It's like a magical enchanted land. Except real."

Through the years the fair has showcased Oregon crops and livestock, arts, and culture, and has hosted many food booths and vendors as well as judging competitions, horse racing and popular entertainers. In 2007 the fair hosted its first Lucha Libre (Hispanic wrestling) event.

Outdoor concerts are held at the L. B. Day Amphitheatre, which was named in 1987 for L. B. Day, an Oregon State Senator and supporter of the fair.

The Oregon State Fairgrounds Pavilion, completed in 2004, is the newest building on the fairgrounds. The 5,000-seat indoor pavilion is used year-round for a variety of events. The pavilion and parking replaced a badly deteriorated grandstand that was built in 1929, and the horse racing track. Architectural ornaments from the grandstand's facade were to be salvaged and incorporated into the replacement building.

The Salem Armory Auditorium is located on a corner of the fairgrounds site, but is not affiliated with the State Fair. This concert venue is owned by the Oregon Military Department.

All content from Kiddle encyclopedia articles (including the article images and facts) can be freely used under Attribution-ShareAlike license, unless stated otherwise. Cite this article:
Oregon State Fair Facts for Kids. Kiddle Encyclopedia.