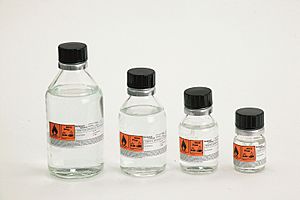 Organolithium compounds contain a direct bond between a carbon atom and a lithium atom. They are an important class of organometallic compound. The bonding between the carbon and lithium is highly polar due to the difference in electronegativity between these atoms, which effectively makes the carbon negatively charged and capable of acting as a strong base or nucleophile. These compounds are similar to Grignard reagents, but are much more reactive. Organolithium reagents such as butyllithium are widely commercially available. Due to their highly reactive nature, they must be handled under a protective atmosphere such as nitrogen or argon as they will catch fire in air.

All content from Kiddle encyclopedia articles (including the article images and facts) can be freely used under Attribution-ShareAlike license, unless stated otherwise. Cite this article:
Organolithium reagent Facts for Kids. Kiddle Encyclopedia.