Ormiston Pound is a ring of mountains in the Northern Territory of Australia punctuating the MacDonnell Ranges, in the West MacDonnell National Park, approximately 135 kilometres (84 mi) west of Alice Springs. It lies at roughly the halfway point in the Larapinta Trail and has views from its circumference of Mount Sonder, Gosses Bluff crater and the surrounding range.

The Pound, a ring of mountains, is dominated by Mount Giles, which forms its eastern boundary. The western boundary is formed by the Ormiston Gorge, a popular tourist destination. 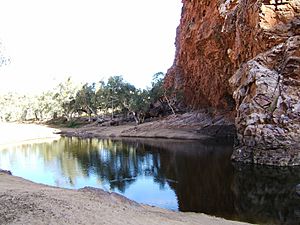 The pound is accessible from a road in the west, which travels between Glen Helen and Alice Springs. There is a waterhole at the bottom near the gorge, as well as several lookouts. The entire pound encompasses 46.55 square kilometres (17.97 sq mi). The Finke River passes Ormiston Gorge in the west.

All content from Kiddle encyclopedia articles (including the article images and facts) can be freely used under Attribution-ShareAlike license, unless stated otherwise. Cite this article:
Ormiston Pound Facts for Kids. Kiddle Encyclopedia.