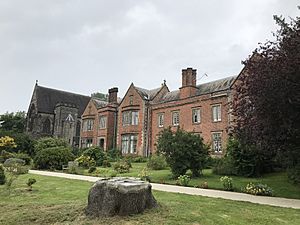 St Mary's Abbey, Oulton is a suppressed Benedictine monastery located in the village of Oulton near Stone in Staffordshire, England. The Abbey church is Grade II* listed, and other buildings are Grade II.

The community was founded in 1624 at Ghent, from a motherhouse established in Brussels in 1598 by Lady Mary Percy. In 1794 as a result of the French Revolution they were forced to flee to England, settling initially at Preston, moving in 1811 to Caverswall Castle, Stoke on Trent.

In 1853 the sisters purchased Oulton House, which at the time was in use as a private asylum. They then commissioned Edward Welby Pugin to remodel the house and build a church. A chapter house, presbytery and sacristy were added in 1892. In 1925 a chapel to St Benedict was built between the chapter house and the sanctuary, on the south side.

In 2002 the Benedictine community from Fernham Priory, Oxfordshire closed their house and many members moved into Oulton Abbey.

The Abbey community is under the charge of an Abbess who is elected by the members and holds the position for life. Since 1624 twenty-two Lady Abbesses have held the post; those in recent history are listed below:

17. Dame Juliana Forster (1837–1869) – Brought the community to Oulton and oversaw the building of the church

A new nursing home was built for the Abbey in 2017. A nursery school is also operated within the grounds. By 2019, with just three nuns remaining in the community, the decision was taken to suppress the Abbey, with the remaining nuns joining Stanbrook Abbey in North Yorkshire, although the last abbess Dame Benedicta Scott remains at Oulton as a resident of the nursing home; a priest also remains in residence and the chapel continues as a public Mass Centre.

Plans are under discussion about the possibility of converting the abbey buildings into assisted living apartments.

All content from Kiddle encyclopedia articles (including the article images and facts) can be freely used under Attribution-ShareAlike license, unless stated otherwise. Cite this article:
Oulton Abbey Facts for Kids. Kiddle Encyclopedia.