Our Lady of Sorrows Church traces its origins to 1782 as the original chapel serving the Presidio of Santa Barbara, which was constructed to protect the colonial establishment of the Spanish Empire within California. Built to serve the Spanish military, the church was founded by Father Junípero Serra, O.F.M., who celebrated Santa Barbara's first Mass at the original site of the Presidio Chapel and had initially supplied all of the furnishings, altar pieces, and a library.

On July 29, 1855, the first church building was consecrated. Initially located at northeast corner of State Street and Figueroa Street, the church was primarily constructed by the students of the nearby seminary college known as the Apostolic College of Our Lady of Sorrows. However, the building was destroyed by fire in August 1865. 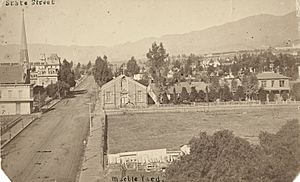 Our Lady of Sorrows Church on State & Figueroa Streets, circa 1880.

By 1908, the church administration was passed to the Jesuit Fathers of the California Province of the Society of Jesus.

On the morning of June 29, 1925, the 6.8 Richter magnitude scale Santa Barbara earthquake destroyed much of the church, including; the facade, an entire side, and one of the bell towers. The remaining bell tower was heavily damaged. A new site was selected at the present day location on the southwestern corner of East Sola Street and Anacapa Street, across from Alameda Park.

On June 30, 2014, a Mass was held that passed the administration of the church over to the Archdiocese of Los Angeles.

All content from Kiddle encyclopedia articles (including the article images and facts) can be freely used under Attribution-ShareAlike license, unless stated otherwise. Cite this article:
Our Lady of Sorrows Church (Santa Barbara, California) Facts for Kids. Kiddle Encyclopedia.