The Outer Circle was built in 1891 as a steam-era suburban railway line, in Melbourne, Australia. It covered much of the modern City of Boroondara, including the suburbs of (from north to south) Kew East, Camberwell, Burwood, Ashburton, and Malvern East. At its longest stage, it ran from Fairfield station, on what is today the Hurstbridge line, to Oakleigh station, on the current Pakenham and Cranbourne lines.

The Outer Circle railway was first advocated by a group known as the Upper Yarra Railway League in 1867 who suggested that the Gippsland Railway could be brought into Melbourne via the outer suburbs, but the term itself was first conceived in 1873 by Engineer-in-Chief of the Victorian Railways, Thomas Higinbotham who suggested an "outer circle route".

Construction of the Gippsland line was authorised in 1873 but the line could not be brought into Melbourne by the direct route used today as the private Melbourne and Hobson's Bay United Railway Company controlled the lines from Flinders Street station to South Yarra, and no connection existed between Flinders Street and Spencer Street stations. By 1879 this issue had been solved, with the direct railway opened and the M&HBUR purchased by the government in 1878.

The next phase of agitation for the Outer Circle line was driven by politics and land speculators; the line being included in both the 1882 and 1884 Railway Construction Acts. The act authorising the line was passed on 12 December 1884, the act also authorising the viaduct connecting Flinders Street and Spencer Street stations. By 1885 two parliamentarians who helped approve the line, F.E. Beaver and James Munro, had purchased half the land adjoining the new railway.

Construction commenced in 1888 and was finally completed by 1891. The Outer Circle connected Camberwell station (on the modern Belgrave and Lilydale lines) with Oakleigh station to the south, via Riversdale on what is now the Alamein line. The final section was north from Riversdale through to Fairfield station (then called Fairfield Park station).

There was also a branch line from the closed Waverley Road station (near the modern East Malvern station) to Darling and Burnley. This was the first section of what is now the Glen Waverley line and was opened a few weeks before the Outer Circle.

When opened the line was 10.3 miles (16.6 km) in length, and had 11 stations, all provided with twin platforms and crossing loops. Provision was made for double track, and heavier duty 75 pounds (34 kg) per yard rails were used. Despite this, the line never carried Gippsland traffic, and the economic depression of the early 1890s saw home building in the area cease. 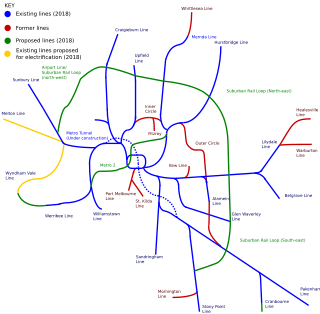 Lack of passengers led the service cuts, with the Riversdale to Fairfield Park section was closed from 12 April 1893, replaced by a horse bus service, the Oakleigh to Ashburton and Darling section closed on 9 December 1895, and the last section from Camberwell to Ashburton closed on 1 May 1897. Camberwell to Ashburton was reopened 4 July 1898 operated by a steam locomotive and single carriage. The northern section was reopened on 14 May 1900 from Riversdale to Deepdene, with a steam train known locally as the Deepdene Dasher running between Ashburton and Deepdene at about 90-minute intervals, connecting at East Camberwell on the lower platform. The Deepdene Dasher was the last passenger steam train in suburban Melbourne.

Electrification work on the Melbourne network commenced in the 1920s, with the Railway Commissioners in 1923 deciding not to electrify the line from Deepdene though Riversdale to Ashburton due to insufficient traffic levels, but would keep the issue under review. Their position was soon reversed, with the Camberwell to Ashburton included in the project, the last steam train running on 29 October 1924 and electric trains commenced 3 days later, shuttle trains running every 40 minutes, connecting at Camberwell. On 15 August 1926 the last steam hauled Deepdene Dasher ran, replaced by a pair of AEC railmotors coupled back to back. The Commissioners intended to electrify the line if the volume of traffic increased, which did not occur, with the service replaced by road bus on 10 October 1927. The electrified suburban service remains as today's Alamein line.

Goods services also operated on the line, initially to Ashburton and some to Deepdene, but was extended to East Kew on 11 February 1925. These services lasted until 6 September 1943. 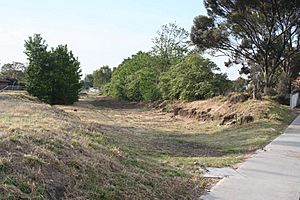 Remains of Fulham Grange station in 2007

Today, the southern section of the line from Camberwell to Alamein is part of the Melbourne suburban railway network as the Alamein line. The northern section of the line, starting at East Camberwell, has been converted into the Outer Circle Trail, a walking and bicycle path. All of the closed stations have since been demolished, as has the railway infrastructure of the line, but some road overbridges and underbridges remain. The rail bridge over the Yarra River was converted into a road bridge as part of the Chandler Highway sometime after 1919. The track between Fairfield station and the Yarra River came into use from 1919 as the APM Siding, serving a paper mill built on the site.

In 2014, a documentary, Melbourne's Forgotten Railway - The Outer Circle, was produced by a Melbourne-based media production team led by Ron Killeen and Andrew McColm. It documented the line and included "historians, an urban planning expert, as well as people who actually remember seeing and riding on the train". 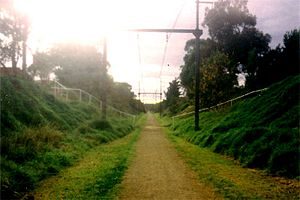 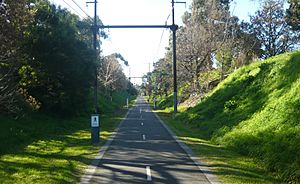 All content from Kiddle encyclopedia articles (including the article images and facts) can be freely used under Attribution-ShareAlike license, unless stated otherwise. Cite this article:
Outer Circle railway line Facts for Kids. Kiddle Encyclopedia.