Planning for Outlaw Run began in 2009, three years before its official announcement in August 2012. Rocky Mountain Construction were contracted to manufacture the ride as their proposal best suited Silver Dollar City's available space and budget. The ride's track layout was designed by Alan Schilke. Outlaw Run opened to the public on March 15, 2013 to generally positive reviews. Today, it is considered one of the best rides at Silver Dollar City. 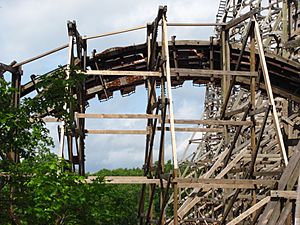 A train going through a banked turn

Planning for a new 2013 attraction in the Silver Dollar City amusement park began in 2009 with the owners, Herschend Family Entertainment, approaching Rocky Mountain Construction and other manufacturers for ideas for "a ride with marketing appeal". Joel Manby, CEO of Herschend, wanted a "world first", to have a wooden roller coaster that would be "the first to do a double barrel roll", which is when the train goes twice through a combination of a loop and a roll. In 2011, Rocky Mountain Construction showcased their new steel roller coaster, New Texas Giant, to park executives. This demonstration secured the contract.

Marketing began in 2011 when the public were made aware at the 2011 trade show of the International Association of Amusement Parks and Attractions that Rocky Mountain were working on a wooden roller coaster; it being later revealed that this roller coaster would be built at Silver Dollar City. Following the beginning of construction at the park, Silver Dollar City launched a teaser website for a new attraction to open in 2013. The website featured a public notice indicating that the ride's theme would be stagecoaches and the wild west. The teaser website also stated that an announcement would be made on August 9, 2012. As part of its teaser campaign leading to the announcement, the park released two clues; the first clue was a handwritten letter, while the second was a photo of the park's Powder Keg: A Blast into the Wilderness attraction and the nearby Table Rock Lake. On August 9, 2012, Silver Dollar City officially announced that Outlaw Run would open in the second quarter of 2013. At its opening, the ride would be the only wooden roller coaster to feature inversions and would feature the steepest drop on a wooden roller coaster. At a cost of $10 million, the ride would be the most expensive Silver Dollar City attraction in more than a decade.

On September 26, 2012, the last piece of track was installed on Outlaw Run. The ride opened to a limited audience on March 13, 2013, with a public opening two days later. Official opening celebrations were held in April.

Outlaw Run was Rocky Mountain Construction's first wooden roller coaster. It is the sixth fastest wooden roller coaster in the world, reaching speeds of up to 68 miles per hour (109 km/h). Throughout the course of the 2,937-foot-long (895 m) ride, riders go through three inversions, including a double heartline roll. The park's existing terrain (the park is located in the Ozark Mountains) is used to allow a 107-foot-tall (33 m) lift hill to be translated into a first drop stretching 162 feet (49 m). 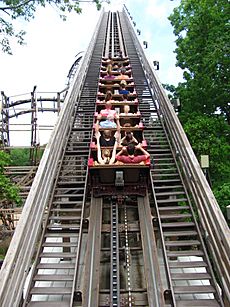 The 2,937 feet (895 m) of track is made primarily of layers of laminated wood, with a steel plate located in the upper layers of the track. The steel plating is known as Topper Track and is found on many roller coasters that Rocky Mountain Construction has renovated. This track style is designed to reduce the maintenance typically required for a wooden roller coaster and to provide a smoother ride experience. Rocky Mountain Construction spent four years developing technology to allow them to twist beams of wood, that make up the lower layers of the track. This track configuration allows for more dynamic roller coaster elements to be performed on a wooden roller coaster.

Outlaw Run consists of two trains, each featuring twelve pairs of riders. Riders, who must be 48 inches (122 cm) or taller to ride, are restrained in their individual fiberglass seats with a U-shaped lap bar. Unlike most roller coaster trains, which have polyurethane wheels, Outlaw Run features steel wheels.

Outlaw Run features a Western stagecoach theme. The ride's station is themed as a stagecoach depot located in the outskirts of Silver Dollar City. According to the ride's storyline, stagecoaches depart daily heading west, where they are intercepted by outlaws who want to steal the riders' belongings. Outlaw Run riders are law enforcement personnel tasked with stopping the outlaws. To keep their family-friendly image, Silver Dollar City uses a variety of theming to advertise that the "good guys" will always win. 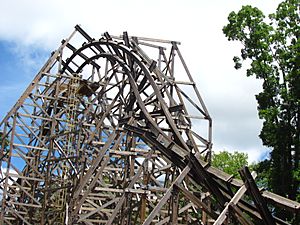 One of the inversions

The train exits out of the station and ascends the chain lift hill. The track then goes through a small pre-drop, similar to that on Bolliger & Mabillard steel roller coasters, before dropping 162 feet (49 m) at an angle of 81°. The train then ascends into the first element, an outside banked turn, where the track is banked over to 153° before rolling back out of the bank. After going around a low-to-the-ground curve, the train enters a 100-foot-tall (30 m) double down followed by a 70-foot-tall (21 m) double up. This is followed by a left turn into a "twist and turn" element, which is then followed by a "wave turn" that drops to the right into a small airtime hill known as a high-speed float. Outlaw Run's final two inversions are heartline rolls, where the rotation axis occurs at approximately chest level. The train then enters the brake run and returns to the station. A single ride cycle is completed in approximately 1 minute and 27 seconds.

All content from Kiddle encyclopedia articles (including the article images and facts) can be freely used under Attribution-ShareAlike license, unless stated otherwise. Cite this article:
Outlaw Run Facts for Kids. Kiddle Encyclopedia.