New Texas Giant, formerly known as Texas Giant, is a steel roller coaster located at Six Flags Over Texas in Arlington, Texas. The original Texas Giant, which opened in 1990, was manufactured by Dinn Corporation and designed by Curtis D. Summers. For more than a decade after its opening, the Texas Giant remained popular, ranking first among wooden roller coasters twice in the annual Golden Ticket Awards from Amusement Today. The ride's popularity suffered later on, however, as it gained a reputation for increasing roughness.

The renovated coaster was well-received, winning Best New Ride in the 2011 Golden Ticket Awards and ranking highly in industry polls. On July 19, 2013, a woman died after falling from the ride, resulting in modifications and additions to the ride's restraint system.

The Texas Giant was constructed using over 900,000 board feet (2,100 m3) of wood. The trains were manufactured by Philadelphia Toboggan Coasters. The Texas Giant officially opened on March 17, 1990. At opening, the ride was the world's tallest wooden roller coaster, standing 143 feet (44 m) high.

Following the ride's opening it had several modifications and renovations, which included reprofiling parts of the ride, shortening the seven-car trains to six-car trains, and performing maintenance on the wooden track. Six Flags Over Texas performed over 1,200 feet (370 m) of trackwork on the ride in the 2008–2009 offseason, with the ultimate aim of improving the ride's smoothness. Although the maintenance did improve the ride, park officials needed a more permanent solution. Initial speculation indicated the ride would be removed entirely from the park; however, Six Flags Over Texas denied any intention or consideration to do so. In March 2009, the park announced the closure of Texas Giant prior to a $10 million renovation. Following Fright Fest for that year, the ride closed on November 1, 2009. 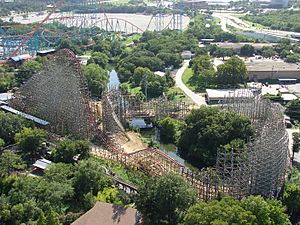 Texas Giant during its renovation

Renovations began almost immediately and involved the removal of all of the wooden track and modifications to some of the support structure. On March 3, 2010, Six Flags Over Texas and Rocky Mountain Construction (RMC) unveiled the steel I-Box track which would be used on the refurbished ride. The track was developed over the course of three years by RMC owner Fred Grubb, and Ride Centerline, LLC engineers Alan Schilke and Dody Bachtar. The steel track was designed to be a replacement for any existing wooden track structure, with the rail shape, approximate weight, and dimensions remaining the same. Schilke designed the modifications to the layout, giving specifications to Grubb for manufacturing at RMC's Idaho plant. There, two-dimensional plates of steel were machine-welded to form the three-dimensional track parts. The redevelopment saw much of the track get reprofiled; the lift hill was increased by 10 feet (3.0 m), the first drop was steepened to 79 degrees, and several overbanked turns (ranging from 90° to 115°) were added. The renovated ride, dubbed the New Texas Giant, reopened on April 4, 2011.

The Texas Giant before and after its renovation, showcasing the profile of the first drop and a turnaround. The renovated ride features a steeper and longer first drop, as well as several overbanked turns up to 115° (pictured).

As the name suggests, New Texas Giant is located within the Texas section of Six Flags Over Texas. It was Rocky Mountain Construction's first installation of I-Box track. New Texas Giant operates with three trains manufactured by Gerstlauer. There are three trains (colored red, blue, and black) themed to 1961 Cadillac Devilles. Each train is made up of six cars, each seating riders in two rows of two. Riders are restrained through the use of an individual hydraulic lap bar and a seat belt.

The original Texas Giant by Dinn Corporation was 10 feet (3.0 m) lower in height than its Rocky Mountain Construction counterpart. The refurbished New Texas Giant features a steeper and longer first drop, and therefore achieves a faster maximum speed. Additionally, a 540° helix after the mid-course brake run was converted into a 180° turnaround, resulting in its track length being shortened by approximately 400 feet (120 m). 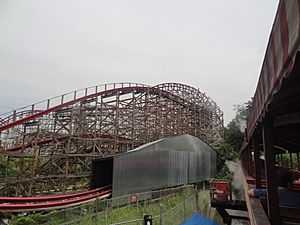 An overview of part of the New Texas Giant's layout including the double up, 90° overbanked turn, and final tunnel

The New Texas Giant begins with a right turn out of the station. This leads directly to a 153-foot-tall (47 m) chain lift hill. Once at the top, riders drop 147 feet (45 m) at an angle of 79°. A double up leads into a 90° overbanked turn, a dip and a 95° overbanked turn. Another dip and rise leads the train into a 115° overbanked turn. The exit from the overbanked turn leads into a small air-time hill, which delivers the greatest negative g-force on the ride, before ascending up into the mid-course brake run. The train drops from the brake run and continues through a series of low-to-the-ground air-time hills and directional changes. This runs through three separate tunnels, finishing with the final brake run and short path back to the station.

All content from Kiddle encyclopedia articles (including the article images and facts) can be freely used under Attribution-ShareAlike license, unless stated otherwise. Cite this article:
New Texas Giant Facts for Kids. Kiddle Encyclopedia.