Oxford is a small town of around 2,100 people serving the farming community of North Canterbury, New Zealand. It is part of the Waimakariri District and is a linear town, approximately 2 kilometres (1.2 mi) long. Originally, it was served by the Oxford Branch railway, and had two stations, East Oxford and West Oxford. The line closed in 1959 and was dismantled. Some railway signs and the remnants of railway platforms can still be seen along Oxford Road on the way to Rangiora.

It was originally a logging town: trees were felled from forests in the area, and hauled by beast to Christchurch. A mural depicting life from that era is painted on the side wall of the butchers shop. 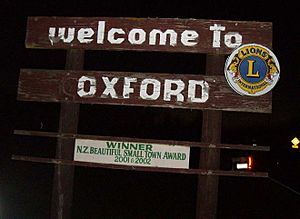 Oxford is located at the inland edge of the Canterbury Plains, approximately 50 km northwest of Christchurch. The township is about 30 km from Rangiora to the East, and the townships of Sheffield and Darfield to the west.

It is unclear whether the town is named after Oxford in England or after its university, but it is more probable that it was named after Samuel Wilberforce, who was the Bishop of Oxford from 1845 to 1870. It was named by the chief surveyor of the Canterbury Association, Joseph Thomas, in 1849.

The town of Tirau in the North Island was originally also named Oxford, in a name pairing with Cambridge 30 km to the west. Owing to confusion between the two towns, the North Island town was later renamed Oxford North before adopting its current name in 1895. 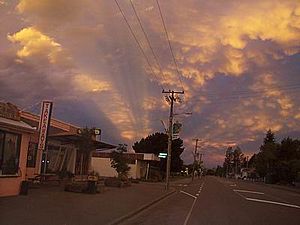 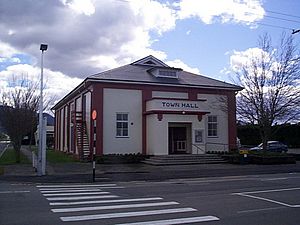 The Town Hall before earthquake renovations

The community saved hard during 2005 and 2006 to raise funds for projects such as the Oxford Community Pool, a community-based swimming pool in Burnett Street, and a first-response ambulance. The town prides itself on its ability to self-fund community projects through organizations such as the Lions.

Oxford has several Churches and organisations:

Oxford was linked to Christchurch in 1878 by the narrow-gauge Oxford Branch from Oxford West to Rangiora to meet the broad gauge from Christchurch. With the gauge conversion of 1878, it became easier to transfer passengers and freight from the branch line to Christchurch, though passengers still had to change at Rangiora from the Waipara train to the branch train. The branch stretched from Rangiora through Bennetts Junction (where the Eyreton Branch joined), Oxford and Sheffield. This necessitated a high road-rail bridge across the Waimakariri Gorge.

From Oxford to Sheffield closed in 1931 along with the Eyreton Branch, leaving the Oxford branch as a rural branch line. It lost its passenger service in the 1940s. Due to declining revenue, the branch closed on 31 May 1959 and the track was sold to Scotts Engineering of Christchurch, which used the rails from several branch lines to build farm sheds.

The line was latterly worked by the A and AB class 4-6-2 and C class 2-6-2 tender locomotives. No diesel locomotives or railcars are known to have used the branch, although thought was given in the 1940s to running a small railcar.

The OB&I was formed during World War I to provide charitable support to war widows. To raise money, it showed films in the old Oxford Town Hall. It provides charitable support to the citizens of Oxford. Movies are screened in the Town Hall approximately every other Saturday during the winter. The heyday of the OB&I movies was the middle of the 20th century, when three or four films would be shown every week and queues often extended around the building. This was before private car ownership became popular, as the nearest cinema was in Christchurch, some 50 km distant.

The Oxford Town hall, where movies were shown, was closed, along with several other Council operated buildings, in late 2011, as the building was determined to be earthquake prone. The Oxford Town hall was reopened on 19 February 2015.

With the Town Hall being reopened, the movies returned to Oxford on the 11th June 2016, with a showing of Hunt for the Wilderpeople. Oxford Movies website 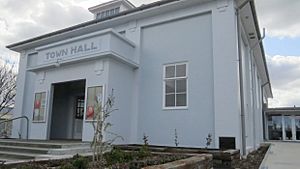 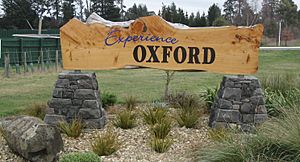 During 2009, Main Street underwent a major renovation with the road resurfaced, pedestrian refuges in strategic locations and new footpaths with garden beds. The old welcome signs were replaced with new "Experience Oxford" signs at east and west entries. This project was a joint undertaking by the Waimakariri District Council and the Oxford Promotions and Action Committee (OPAC), but they ran out of money and did not finish both sides of the street.

All content from Kiddle encyclopedia articles (including the article images and facts) can be freely used under Attribution-ShareAlike license, unless stated otherwise. Cite this article:
Oxford, New Zealand Facts for Kids. Kiddle Encyclopedia.