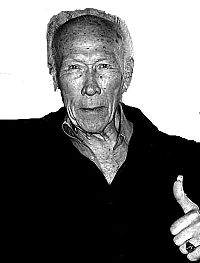 Verdi Phefferkorn von Offenbach (26 February 1922 – 1 January 2021), better known as ‘Paatje Phefferkorn’, was an Indonesian-Dutch practitioner and mixed martial artist. He was born in Bandung, Dutch East Indies. He was the creator of the 'Indo Melati' flag and emblem. In 1967 he started a small mixed martial arts school in the city of Utrecht. Soon he created a second school and in the end ran 17 schools throughout the Netherlands.

All content from Kiddle encyclopedia articles (including the article images and facts) can be freely used under Attribution-ShareAlike license, unless stated otherwise. Cite this article:
Paatje Phefferkorn Facts for Kids. Kiddle Encyclopedia.