Paddington Water Tower is a heritage-listed water tower at 16 Garfield Drive, Paddington, City of Brisbane, Queensland, Australia. It was designed by Metropolitan Water Supply & Sewerage Board and built by day labour in 1927. It was added to the Queensland Heritage Register on 23 June 2000.

By the beginning of the 20th century, Brisbane was drawing most of its water from the Brisbane River at Mount Crosby. Enoggera Dam and Gold Creek Dam were also feeding into the system. At this stage none of the supplies were filtered and Brisbane's water supply was neither treated nor tested until the first decade of the twentieth century.

In 1907, American hydraulic engineer, Allen Hazen, was engaged by the Brisbane Board of Waterworks to report on the amplification of Brisbane's supply. He recommended against the construction of a dam on the Brisbane River in its middle catchment because of his perception of the danger of rapid loss of storage capacity because of siltation. He recommended storage on Cabbage Tree Creek, a tributary of the Brisbane River, some 19 kilometres (12 mi) upstream of Mount Crosby and further recommended the site of the Somerset Dam on the Stanley River for future amplification of storage.

From about 1916, the shape of Mount Crosby and nearby Holt's Hill underwent a series of changes with structures erected, extended and demolished in response to the water quality demands of Brisbane, and after 1922, of Ipswich.

Supplying water to the higher parts of Paddington had always been difficult, so it was a great benefit to residents when the Water Board opened this tower in 1927 which was fed from Enoggera Dam. The Board had striven for 12 years to obtain the £12,000 necessary to build the Paddington Tower. The Tower was dedicated on 4 March 1927 and was officially opened by Mr Ernest James Theodore Manchester, President of the Metropolitan Water Supply and Sewerage Board, with members of the board and local residents in attendance. The tower was described as the finest piece of work constructed by any authority and at the time was the most expensive single structure ever to have been constructed in the Town of Ithaca.

At the opening the President said it had always been the aim of the Water Board to afford facilities to provide a full water supply to all residents on elevated land and that in time he hoped to see all elevated lands graced by water towers. The power for the motor which hoisted the water into the tank was switched on by Mr J J Roberts who referred to Paddington Heights as the Dress Circle of Brisbane.

The structure was designed by the Board's engineer and erected by the board's staff with day labour on a site 335 feet (102 m) above sea level. The tank is composed of reinforced concrete and the height from the highest point is 70 feet (21 m). It is capable of holding 100,000 imperial gallons (450,000 l; 120,000 US gal). The Tramway Department provided the electricity required for the centrifugal pump which propelled water from the tank below

A cottage was erected alongside the tank on the vacant piece of ground shortly after the tower was opened so that the turncock would live on the premises and give every attention to see that the tank was constantly well filled with water. 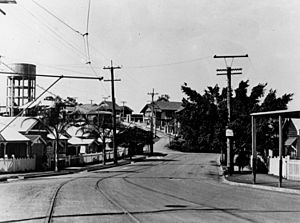 Paddington Water Tower is surplus to water supply requirements and is no longer in use. It is essentially unaltered from its original appearance. Located on Archibald's Hill, it is one of Brisbane's oldest and most prominent landmarks. It is probably the only one of its type in Queensland being a reinforced concrete tank elevated on concrete columns.

The Paddington tank and its tower are of reinforced concrete construction The circular tank is supported on a structural framework of twelve columns and octagonal grids of haunched beams. The water tower is 70 feet (21 m) high and the tank has a capacity of 100,000 imperial gallons (450,000 l; 120,000 US gal) and the top water level is 335 feet (102 m) AHD.

The tower is a prominent Brisbane landmark in the north western suburbs. It is visible from miles around and most vantage points and is readily recognisable.

Paddington Water Tower was listed on the Queensland Heritage Register on 23 June 2000 having satisfied the following criteria.

Paddington Water Tower is important in demonstrating a phase in the history of Brisbane's water supply and the technological difficulties of providing reticulated water to elevated sites.

The Paddington Water Tower is important for its aesthetic qualities as a readily recognisable landmark. It is one of Brisbane's most prominent landmarks.

All content from Kiddle encyclopedia articles (including the article images and facts) can be freely used under Attribution-ShareAlike license, unless stated otherwise. Cite this article:
Paddington Water Tower Facts for Kids. Kiddle Encyclopedia.