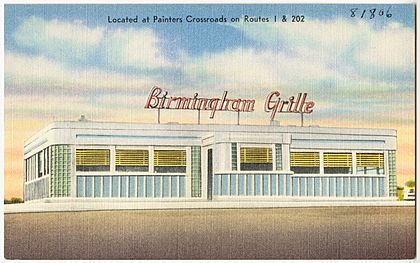 The former Birmingham Grille, located at the crossroads

Painters Crossing (or Painter's Crossroads) is a historic area of Chadds Ford Township, Delaware County, Pennsylvania, near where U.S. Route 202 and U.S. Route 1 cross. The area is important in connection to the Revolutionary War battle at Brandywine.

"Wayne posted a small brigade armed with four cannon, at Painter's Crossroads to cover the troops retreating toward Chester. They kept the main road to Chester open not only for Wayne's retreating men, but Nash's North Carolinians, and the rear guard of Sullivan's troops who were falling back from Dilworth."

The area of Painter's Crossing is named after Samuel Painter, a Quaker who moved to America in 1682 with William Penn and who purchased a large expanse of land in the area along the Brandywine in 1707 from John Piggott. His descendants lived in the land for many generations afterward. Their history is recorded in the book Descendants of Samuel Painter 1699–1903 by Orrin Chalfort Painter.

In the 1930s the WPA Guide to Pennsylvania stated that it had a population of 37 and an altitude of 437 feet.

A condominium complex a few hundred feet from this intersection carries the official name "Painter's Crossing." This name is a slightly edited version of the more historical name, "Painter's Crossroads."

All content from Kiddle encyclopedia articles (including the article images and facts) can be freely used under Attribution-ShareAlike license, unless stated otherwise. Cite this article:
Painters Crossing, Pennsylvania Facts for Kids. Kiddle Encyclopedia.