Panwapa is an American children's television series. It is co-produced by the Merrill Lynch Foundation and Sesame Workshop, the latter of which supplied the cast of puppets. The series was first released online via iTunes in 2007 and later premiered on PBS Kids Sprout in January 2008. 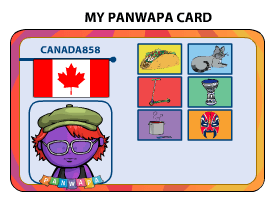 A Panwapa Kid card, depicting a Kid from Canada whose interests are: tacos, cats, scooters, doumbek, cooking and Mexican masks.

Panwapa Island is a giant island that can freely float across planet Earth's oceans. This allows the residents of the island to visit freely with children from many lands and explore differing cultures.

All content from Kiddle encyclopedia articles (including the article images and facts) can be freely used under Attribution-ShareAlike license, unless stated otherwise. Cite this article:
Panwapa Facts for Kids. Kiddle Encyclopedia.