Paraserianthes lophantha, commonly called Albizia, Cape Leeuwin Wattle, Cape Wattle, Crested Wattle or plume albizia, is a fast-growing wattle with creamy-yellow, bottlebrush like flowers. It is a small tree (uppermost height approximately 5 metres) that occurs naturally along the southwest coast of Western Australia, from Fremantle to King George Sound. It was first spread beyond southwest Australia by Baron Ferdinand von Mueller, who gave packets of P. lophantha seeds to early explorers under the assumption that if they planted the seeds at their campsites, the trees would indicate the routes they travelled.

It is considered a weed in the parts of Australia where it is not indigenous, as well as in New Zealand, South Africa, the Canary Islands, and Chile.

It was first described in 1806 as Acacia lophantha by Willdenow, but was transferred to the genus Paraserianthes by Nielsen, Guinet and Baretta-Kuipers in 1983. 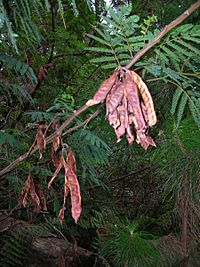 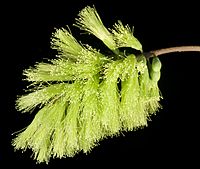 All content from Kiddle encyclopedia articles (including the article images and facts) can be freely used under Attribution-ShareAlike license, unless stated otherwise. Cite this article:
Paraserianthes lophantha Facts for Kids. Kiddle Encyclopedia.