In this Korean name, the family name is Park. 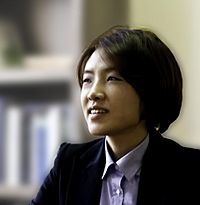 Park Eun-ji (23 January 1979 – 8 March 2014) was a South Korean politician. She was the vice delegate of the Labor Party. She also was a candidate of New Progressive Party in the 19th legislative election. She was born in Seoul. She also studied at the Korea University from 1997 to 2001.

Park Eun-ji died on the evening of 8 March 2014 in her Seoul home. She was 35 years old. She was outlived by her daughter.

All content from Kiddle encyclopedia articles (including the article images and facts) can be freely used under Attribution-ShareAlike license, unless stated otherwise. Cite this article:
Park Eun-ji Facts for Kids. Kiddle Encyclopedia.