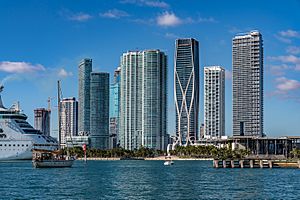 Park West is a neighborhood of Greater Downtown, Miami, Florida, United States. It is roughly bound by Biscayne Boulevard to the east, West (NW) First Avenue to the west, North (NE/NW) 7th Street to the south and Interstate 395 to the north. As of 2010, about 4,655 residents live in Park West. The neighborhood is named 'Park West' due to its location just west of Museum Park.

Much of the neighborhood west of the Metromover will be developed into Miami World Center a major urban center containing a convention center, hotel, residential condo towers, and 765,000 square feet of retail. Plans for an enclosed Mall at Miami WorldCenter anchored by Bloomingdales and Macy's, have been replaced in favor of an open air promenade shopping district. Demolition of buildings making up the former "club row" began in 2015 clearing the way for construction to begin.

Park West is served by Miami-Dade Transit via Metrobus along major thoroughfares, and by the Miami Metrorail and Metromover at:

All content from Kiddle encyclopedia articles (including the article images and facts) can be freely used under Attribution-ShareAlike license, unless stated otherwise. Cite this article:
Park West (Miami) Facts for Kids. Kiddle Encyclopedia.