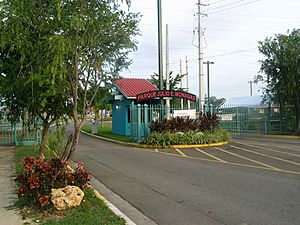 The park is located in barrio Bucana, at the merging of Rio Portugues and Rio Bucana, off PR-2 (Ponce By-pass). The park was built at a cost of over $3 million.

The park was severely damaged by Hurricane Maria in September 2017 and, as of November 2019, remained closed. In April 2019 the USACE removed debris and, upon completion, the Government of the Municipality of Ponce proceeded to perform cleanup activities. In late September 2019, mayor Mayita announced the allocation of $3.9 USD million for the reconstruction of the park. The funds, however, were to be shared with reconstruction of Teatro La Perla, Complejo Recreativo de La Guancha, Centro Ceremonial Indígena de Tibes, Plaza del Mercado Isabel II, and Complejo Acuático Víctor Vasallo.

All content from Kiddle encyclopedia articles (including the article images and facts) can be freely used under Attribution-ShareAlike license, unless stated otherwise. Cite this article:
Parque Familiar Julio Enrique Monagas Facts for Kids. Kiddle Encyclopedia.