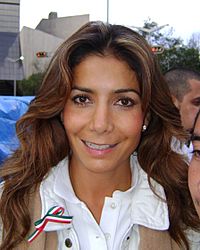 Patricia Manterola (Spanish pronunciation: [paˈtɾisja manteˈɾola]; born Bertha Patricia Manterola Carrión on April 23, 1972) is a Mexican singer and actress. She was born in Mexico City. Her career began in 1989. She was one of the original members of the Mexican pop group Garibaldi. She is known for her role as Julia in the telenovela Apuesta por un amor.

From 1999 to 2005, she was married to Garibaldi group member Xavier Ortiz.

All content from Kiddle encyclopedia articles (including the article images and facts) can be freely used under Attribution-ShareAlike license, unless stated otherwise. Cite this article:
Patricia Manterola Facts for Kids. Kiddle Encyclopedia.