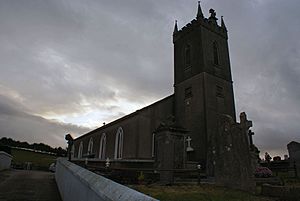 The Patrick Kavanagh Centre (Patrick Kavanagh Rural And Literary Resource Centre) is located in Inniskeen, County Monaghan, Ireland. It is set up to commemorate the poet Patrick Kavanagh who is regarded as one of the foremost Irish poets of the 20th century. He was born in Mucker townland Inniskeen. It is located in the former RC St. Mary's church (which dates from 1820) in whose adjoining graveyard Kavanagh and his wife are buried. The centre was developed by the Inniskeen Enterprise Development Group and was opened by President Mary Robinson in 1994. The centre underwent a €1 million renovation before reopening in July 2020!

Mary Robinson President of Ireland dedicated the Kavanagh Centre in Inniskeen in 1994, saying: ‘Let us remember him as he deserves to be remembered: not as an ornament to our literature - although he certainly is that - but as a poet who is still living among us, through his powerful and challenging poems and the force of his artistic conscience.’

The centre houses exhibitions outlining Kavanagh's life story as well as the history of the surrounding area. It includes a topographical model of the area, a model illustrating Kavanagh's poem, "A Christmas Childhood" paintings,and informational panels on the poet. The Peter Kavanagh hand press is on loan from the Kavanagh Archive University College Dublin. Kavanagh's Death Mask which was formerly owned by John Ryan is also on display. There are many other memorabilia on display including letters, and the font Kavanagh was baptised in.

There is a 60-seater Audio-visual theatre, which is used to show films on Kavanagh One of the best is "Self Portrait" a half an hour straight to camera monologue ny the Poet recorded for RTÉ back in 1962. On the large screen it is amusing and deeply moving.

The centre offers a tour of Kavanagh Country, which takes in many local sites associated with the poet and his poetry and novels. It also has a Patrick Kavanagh Trail guide. The trail takes in sites some of which may be visited by the public (noted with a * if they can be visited) others can be viewed from the roadside, these include:* Patrick Kavanagh Literary & Resource Centre, Norman Notte & Augustinian Monastery (ruins)* Folk Museum & Round Tower, Railway Bridge,* Church of Mary Mother of Mercy Dance Hall at Mullaghinsha, Billy Brennan's Barn Rocksavage Fort & The Triangular Field* Slieve Gullion View, Drumcattan Church, Rocksavage Estate, Kednaminsha National School, Mc Enteggarts' Boarding House, House of The Wake, Cassidy's Hanging Hill, The Kavanagh Homestead.

The Monaghan Way a walking route starts from the centre and goes cross country to Castleblayney following the route of the Fane river and the old railway line.

All content from Kiddle encyclopedia articles (including the article images and facts) can be freely used under Attribution-ShareAlike license, unless stated otherwise. Cite this article:
Patrick Kavanagh Centre Facts for Kids. Kiddle Encyclopedia.