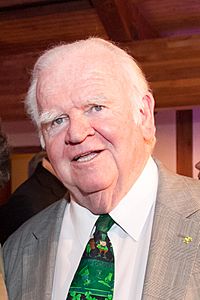 He was appointed in January 1997 to fill the vacancy caused by Dennis Kucinich, who was elected to Congress. Sweeney was born in Cleveland, Ohio.

All content from Kiddle encyclopedia articles (including the article images and facts) can be freely used under Attribution-ShareAlike license, unless stated otherwise. Cite this article:
Patrick Sweeney (politician) Facts for Kids. Kiddle Encyclopedia.