The Pavek Museum is a museum in St. Louis Park, Minnesota, United States (just west of Minneapolis), which has one of the world's most significant collections of vintage radio and television equipment. It originated in the collection of Joe Pavek, who began squirreling away unique radios while he was an instructor at Dunwoody Institute in 1946. Students of the day were given old radios to disassemble in order to learn their trade, and Pavek was concerned about what might be destroyed in the process.

Pavek's collection expanded through the 1970s, when he decided to look for someone to take over for him. He had difficulty finding someone who would take the job and was about to sell off the collection at auction in 1984 when Earl Bakken stepped in. Bakken, the founder of Medtronic and the inventor of the first wearable pacemaker, had also spent many years fixing old radios and TVs, and shared Pavek's passion for vintage hardware. The two joined Paul Hedberg of the Minnesota Broadcasters Association in creating a non-profit organization that would be the new museum's parent. The Pavek Museum opened on October 29, 1988, a day that was honored with a proclamation by Governor Rudy Perpich as "Joe Pavek Day."

Joe Pavek died a year later in 1989, and Bakken assumed leadership of the organization. In 1990 the collection was greatly expanded with the addition of the collection of John T. "Jack" Mullin, an Army Signal Corps veteran of World War II who had brought some AEG Magnetophon tape recorders back to the United States from Germany. Mullin used them to record Bing Crosby's radio programs, the first use of magnetic tape in American broadcasting. Over the years, he acquired other recording devices and eventually amassed a world-renowned collection.

The museum has offered educational courses since its founding, both for children and adults.

Since 2001, the museum has been honoring legendary area broadcasters by inducting them into the Minnesota Broadcasting Hall of Fame. 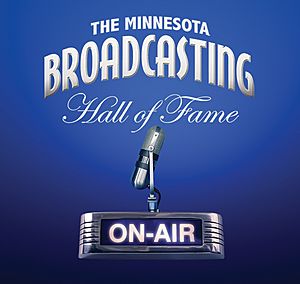 Logo of the Minnesota Broadcasting Hall of Fame

All content from Kiddle encyclopedia articles (including the article images and facts) can be freely used under Attribution-ShareAlike license, unless stated otherwise. Cite this article:
Pavek Museum of Broadcasting Facts for Kids. Kiddle Encyclopedia.