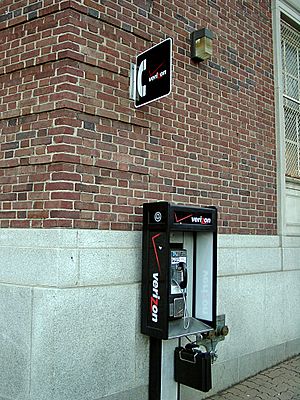 A payphone in the United States.

A payphone is a telephone that lets the public make phone calls if they pay for them first. Many payphones accept coins, but some can accept credit cards, debit cards, and phone cards as well. In the 20th century they were very often used, especially in cities. When people used more mobile phones, payphones quickly became rarer in small towns, and later also in cities.

All content from Kiddle encyclopedia articles (including the article images and facts) can be freely used under Attribution-ShareAlike license, unless stated otherwise. Cite this article:
Payphone Facts for Kids. Kiddle Encyclopedia.