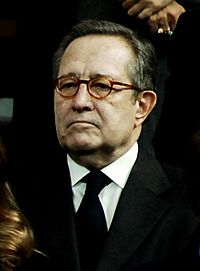 Pedro Erquicia López de Montenegro (24 March 1943 – 20 April 2018) was a Spanish journalist and television producer. He was born in San Sebastián, Gipuzkoa, Spain. His career began in 1956 when he began working for Televisión Española. He hosted the TVE's newscast Telediario (1972-1973).

In 1973 Erquicia created one of the longest running programs in Spanish television: Informe Semanal. In 1987 he was fired by TVE and later he joined the then recently created public broadcaster Telemadrid.

All content from Kiddle encyclopedia articles (including the article images and facts) can be freely used under Attribution-ShareAlike license, unless stated otherwise. Cite this article:
Pedro Erquicia Facts for Kids. Kiddle Encyclopedia.