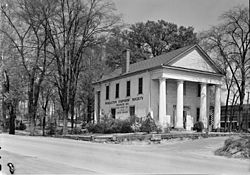 Farmers' Hall, whose construction was begun for the second Pendleton District court house.

Pendleton District, named after US Judge Henry Pendleton, is a former judicial district in South Carolina. It existed as a county or a district from 7 March 1789 to 20 December 1826.

In the colonial period, the land around the coast was divided into parishes corresponding to the parishes of the Church of England. There were also several counties that had judicial and electoral functions. As people settled the backcountry, judicial districts and additional counties were formed. This structure continued and grew after the Revolutionary War. In 1800, all counties were renamed as districts. In 1868, the districts were converted back to counties. The South Carolina Department of Archives and History has maps that show the boundaries of counties, districts, and parishes starting in 1682.

All content from Kiddle encyclopedia articles (including the article images and facts) can be freely used under Attribution-ShareAlike license, unless stated otherwise. Cite this article:
Pendleton District, South Carolina Facts for Kids. Kiddle Encyclopedia.