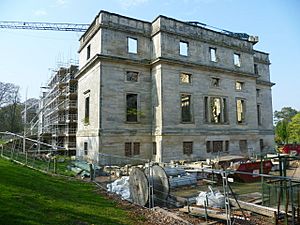 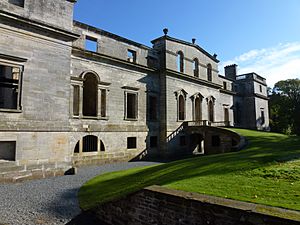 Penicuik House (alternative spellings: Penycuik, Pennycuik) survives as the shell of a formerly grand estate house in Penicuik, Midlothian, Scotland. The 18th-century palladian mansion (at ) was built on the site of an earlier house by Sir James Clerk, 3rd Baronet. It was destroyed by fire in 1899 and a major restoration was completed in 2014 by G Brown Stonemasons.

Old Penicuik House and New Penicuik House (the former stables block in which the Clerk family were living even before the fire) are both designated Category A listed buildings by Historic Environment Scotland.

It was John Clerk of Pennycuik who, returning to Scotland from France in 1646, purchased the estate and barony of Penicuik, the Penicuik Policies. The estate became the residence and title of his descendants.

Penicuik House was built in 1761 by Sir James Clerk, the 4th Laird of Penicuik and 3rd Baronet. Clerk had travelled widely, especially in Italy, and had studied Italian architecture. Now a roofless shell, it is constructed of ashlar, it has a central hexastyle portico with two-way stair, piano nobile, basement and Palladian windows. The interior was gutted by fire in 1899, but formerly had many fine rooms. The house was a great meeting point for figures of the Scottish Enlightenment, who came to view its collection of paintings, including a noted ceiling painting of Ossian's Hall, by Alexander Runciman. 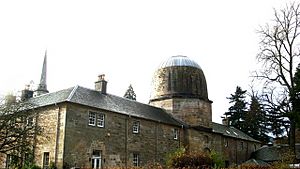 The deliberate destruction of Arthur's O'on so appalled Sir James Clerk, that in 1760 he decided to have a dovecote built, as an exact replica of the temple, on his stable block at Penicuik House.

All content from Kiddle encyclopedia articles (including the article images and facts) can be freely used under Attribution-ShareAlike license, unless stated otherwise. Cite this article:
Penicuik House Facts for Kids. Kiddle Encyclopedia.