Kids Encyclopedia Facts
Not to be confused with Pennsylvania Archives. 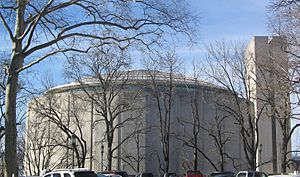 The primary function of the Pennsylvania State Archives is to acquire, preserve and make available for study the permanently valuable public records of the Commonwealth, with particular attention given to the records of state government. The State Archives also collects private papers relevant to Pennsylvania history.

The State Archives collection, as of 2000, contained one hundred and sixty-five million pages of documents, seventeen thousand reels of microfilm, and one million special collection items, including photographs, maps and blueprints, motion picture rolls, and audio and video tapes covering the period 1664 to the present. It nearly filled the twenty-story Archives Tower. The temperature in the Archives Tower is maintained at sixty-eight degrees Fahrenheit and humidity is kept at forty-five to fifty percent. Records are stored in acid-free folders and boxes. Among the treasures housed at the State Archives is the 1681 Charter from Great Britain's King Charles II to William Penn, the 1737 Walking Purchase, an 1857 photograph of the Horseshoe Curve, photographs of the ruins of Chambersburg taken in 1864, the 1878 Death Warrant for John J. Kehoe and a letter to Governor Duff relating to the 1948 Donora smog disaster.

All content from Kiddle encyclopedia articles (including the article images and facts) can be freely used under Attribution-ShareAlike license, unless stated otherwise. Cite this article:
Pennsylvania State Archives Facts for Kids. Kiddle Encyclopedia.