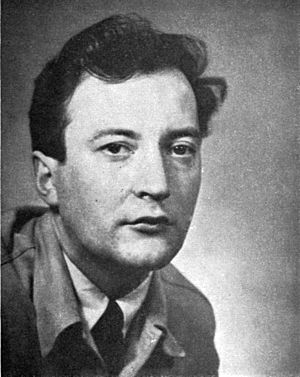 Pentti Holappa in the late 1950s

Holappa held many jobs before becoming a political journalist and eventually obtaining a government post. He was self-educated, but produced around fifteen volumes of poetry, as well as several novels and essays. He also worked as a translator; among the poets and authors whose work he translated into Finnish are Charles Baudelaire, Pierre Reverdy, and J. M. G. Le Clézio. He received the Finlandia Prize in 1998 for his novel Ystävän muotokuva: Portrait of a Friend.

Between February and October 1972, Holappa was Minister of Culture and Education in Finland's Ministry of Education, representing the Social Democratic Party of Finland.

Holappa died in Helsinki, Finland, on 10 October 2017 of breathing problems at the age of 90.

All content from Kiddle encyclopedia articles (including the article images and facts) can be freely used under Attribution-ShareAlike license, unless stated otherwise. Cite this article:
Pentti Holappa Facts for Kids. Kiddle Encyclopedia.