Peoa (pronunciation: /piːˈoʊə/) is an unincorporated census-designated place in southwestern Summit County, Utah, United States, between Jordanelle and Rockport State Parks. It lies along State Route 32 south of the city of Coalville, the county seat of Summit County. Its elevation is 6,191 feet (1,887 m). The population was 253 at the 2010 census. Peoa is unincorporated with the ZIP code of 84061.

Peoa was first settled in 1857 by William W. Phelps and others. 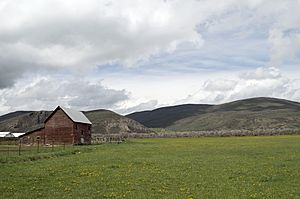 This climatic region is typified by large seasonal temperature differences, with warm to hot (and often humid) summers and cold (sometimes severely cold) winters. According to the Köppen Climate Classification system, Peoa has a humid continental climate, abbreviated "Dfb" on climate maps.

All content from Kiddle encyclopedia articles (including the article images and facts) can be freely used under Attribution-ShareAlike license, unless stated otherwise. Cite this article:
Peoa, Utah Facts for Kids. Kiddle Encyclopedia.