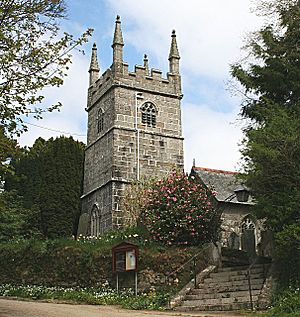 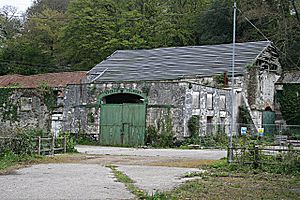 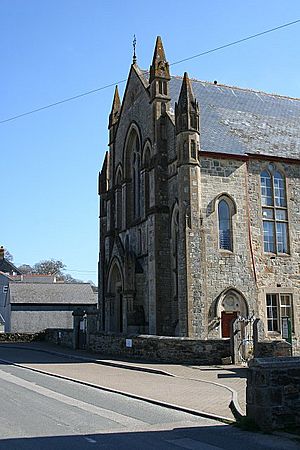 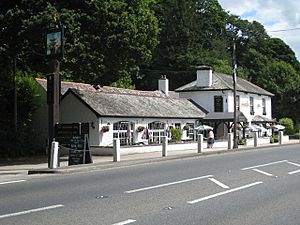 Perranarworthal (Cornish: Peran ar Wodhel) is a civil parish and village in Cornwall, England, United Kingdom. The village is about four miles (6.5 km) northwest of Falmouth and five miles (8 km) southwest of Truro. Perranarworthal parish is bordered on the north by Kea parish, on the east by Restronguet Creek and Mylor parish, on the south by St Gluvias and Stithians parishes and on the west by Gwennap parish. The parish population at the 2011 census was 1,496. The name derives from the Manor of Arworthal which has had a number of spellings in the past including Hareworthal (1187), Arwoethel and Arwythel. By the 18th-century two names appear on maps "Perran Arworthal" meaning St Piran's by the creek or estuary. William Penaluna described the settlement in 1838. Perranwell railway station is on the Maritime Line.

Perran Wharf is the area of the parish beside the River Kennall (a tributary of Restronguet Creek) where there were wharves and a quay. This is currently being developed into Perran Foundry where there will be new homes and working space settled amidst the history of the site. The other settlements in the parish are Perranwell and Perranwell Station.

It was the home of the Perran Iron Foundry, an innovative concern, run by the Fox family of Falmouth and other Quaker business families. It was set up on the site of a tin smelting works in 1791. The foundry was later operated in partnership with the Williams family, and in 1858, it was sold to them.

The creek serving the factory silted up and mining in Cornwall declined. The wharf had been used to import timber for the mining industry from Scandinavia. The slump in the mining industry during the 1870s hit Perran Foundry badly and it closed in March 1879 with the loss of 400 jobs, causing great distress in the parish. In April 1879, the Royal Cornwall Gazette reported that a soup kitchen had been open since January: ″793 people had attended and 1,240 quarts of soup were distributed″. In July 1880 a preliminary notice of an intended auction for Perran Foundry was planned for mid-August. Williams's Perran Foundry covered an area of over 4 acres (1.6 ha) and had a lease of 99 years (commencing 24 August 1874) from Colonel Tremayne. The property contained a number of workshops, including blacksmith and engineers, a hammermill and a quay at Restronguet with access for 200 ton vessels.

The buildings including Manor Mill on the opposite side of the road were later adapted by the Edwards Brothers for the milling and storage of grains and animal foods, and also cloth dyeing; another waterwheel was added. Over the years there have been ambitious plans which have come and gone, but little changed at the foundry site for many years apart from the gradual deterioration of the buildings. The site has been used for various purposes since but closed in 1986.

In 2005, the owners, North Hill Estates Ltd., applied for planning permission to redevelop the site. The proposal was for a mix of live/work units and residential accommodation. Further consultation on their proposal was ongoing (2007).

Planning was approved and the site has been under development in recent years to enable new homes to flourish from the foundations of its 200-year history One of the site's most iconic buildings is The Hammer Mill where all of the workings took place. This will be the first opportunity for people to acquire a home in this historic setting, as the show home opens for private viewings on 24 June 2013 with Heather & Lay and Savills.

The Hammer Mill is the most iconic building on this site, converted from what was originally the heart of the old foundry The lofts, apartments and riverside homes being developed at the Perran Foundry commemorate the building's iconic past, as each building has adopted its name from its original purpose.

The Norway Inn was known originally as the Norway Hotel and the name derives from the Norwegian vessels which once brought loads of timber to Perran Wharf, largely for use in the mines. The timber would be seasoned by being 'pickled' for several months in shallow tidal ponds. The Norway Inn was built in 1828/1829 at the same time that the main Falmouth to Truro road was rerouted to cross the Carnon River on an embankment just above the village of Devoran.

Perran's Well, built in 1839, Perran's Well provided fresh spring water from the local Bissoe aquifer. The well was frequented by merchants as they took their goods from penryn harbour to the trade capital of Cornwall, Truro.

Tullimaar House, an early 19th-century mansion, is in the parish. It was the home of Nobel Prize-winning novelist Sir William Golding and is still occupied by Golding's son David.

The 15th-century Anglican parish church dedicated to Saint Piran was rebuilt to the design of James Piers St Aubyn between May 1881 and 1882, at a cost of £1,200. At the time of the consecration ceremony which took place on 16 May 1882, a further £150 was required to install the pews. While the church was closed services were held in the old Wesleyan chapel. The original granite tower remains from the 15th-century church. Pevsner described the church as "indifferent".

The foundation stone of the Wesleyan chapel was laid on 17 March 1879 and the first service was held on Thursday, 5 February 1880. The chapel, designed by James Hicks of Redruth is built in the early English style at an estimated cost of £2,220 and can accommodate six-hundred people.

All content from Kiddle encyclopedia articles (including the article images and facts) can be freely used under Attribution-ShareAlike license, unless stated otherwise. Cite this article:
Perranarworthal Facts for Kids. Kiddle Encyclopedia.