Perrin is a census-designated place and unincorporated community in southeastern Jack County, Texas, United States. It has a population of approximately 500, and it is located at the intersection of US HWY 281 and FM 2210.

It was established in 1870 and named for Levi W. Perrin, the father of the town's founder, Louis Perrin. 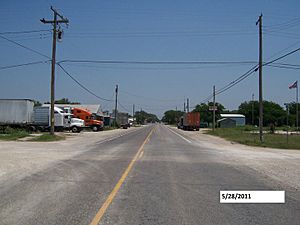 In the early 20th century, the small town supported two banks and was larger than Jacksboro, Texas. Perrin was in prime consideration for the county seat and was only passed over because it was not centrally located within the county.

Currently the town consists of: The Pirates Cove (the town's only gas station), Perrin Feed and Hardware, the US Post Office (zip code 76486), multiple churches, and the school. Additionally, two miles outside of Perrin is Mitchell Resort and RV Park, which was founded by the William and Frances Mitchell family. The Mitchell family built the RV park to host Bluegrass Festivals. The first festival was in 1975. William and Frances raised 5 children all who participated in the festivals. These festivals in Perrin, were a national event and the Mitchell Family Bluegrass Gospel band was one of the finest in the nation. Festivals ended in approximately 1998 and did not begin again until 2004, under new owners who are still the current owners. 2015 Bluegrass Festivals will celebrate the 40 year anniversary of Bluegrass in Perrin. All five Mitchell adult children still perform in various Bluegrass bands. The youngest, Patty Beth Mitchell, in the early 90's served as "interim bassist/mandolinist and lead vocalist for the fledging band, the Dixie Chicks." She helped "them win their first prestigious music award, the Telluride Band Contest ". "Later on, she traveled the east and west coasts as a founding member of the Domestic Science Club". Patty currently resides in Nashville, Tennessee.

The Perrin-Whitt Consolidated Independent School District serves area students including those living in the nearby community of Whitt.

All content from Kiddle encyclopedia articles (including the article images and facts) can be freely used under Attribution-ShareAlike license, unless stated otherwise. Cite this article:
Perrin, Texas Facts for Kids. Kiddle Encyclopedia.