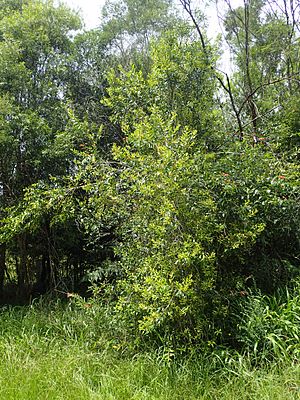 Persoonia conjuncta is a species of flowering plant in the family Lamiaceae and is endemic to eastern New South Wales. It is an erect shrub or small tree with narrow elliptic to lance-shaped leaves, yellow, tube-shaped flowers in groups of up to sixteen and green fruit.

Persoonia conjuncta was first formally described in 1991 by Lawrie Johnson and Peter Weston in the journal Telopea from specimens collected by Johnson on Mount Yarrahapinni (near Kempsey) in 1980.

This geebung grows in forest on the coastal ranges in the Coffs Harbour district and south to the Manning River in eastern New South Wales.

All content from Kiddle encyclopedia articles (including the article images and facts) can be freely used under Attribution-ShareAlike license, unless stated otherwise. Cite this article:
Persoonia conjuncta Facts for Kids. Kiddle Encyclopedia.