This round barn was constructed sometime in the late 1870s or early 1880s. There were originally two—or possibly three—in the vicinity, but this is the only round barn remaining. They were used to break horses during the winter. Three hundred to one thousand horses were moved through each year. The French family donated the site to the state of Oregon in 1969. 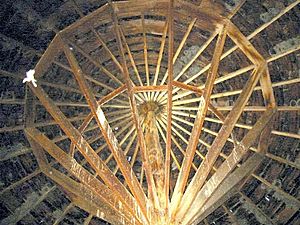 The interior of the barn consists of a circular rock wall, constructed with local rock and mud, which encloses the central stable area. The remainder of the structure is constructed from lumber that was hauled to the site from 60 miles to the north. The interior is unique in that it is supported by juniper posts. The center area was used as a horse stable; around the outside of the rock wall, there is a covered circular track that was used to exercise horses during winter months. The barn looks much as it did when cattleman Pete French constructed it.

All content from Kiddle encyclopedia articles (including the article images and facts) can be freely used under Attribution-ShareAlike license, unless stated otherwise. Cite this article:
Pete French Round Barn Facts for Kids. Kiddle Encyclopedia.