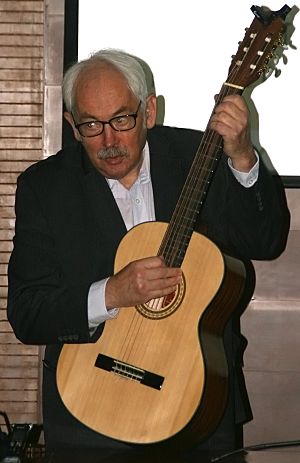 Grünberg was born in Pilsen, Bohemia, which was controlled by the Nazis. They called the country the Protectorate of Bohemia and Moravia and it is known now as the Czech Republic. Grünbergs father was called Fjodor Grinberg but he changed his name to Fjodor Grünberg in 1941.

The rest of the Grünberg family stayed for some time in the Petermann house in Untersekerschan but, after World War II, all people living in Pilsen who spoke German were made to leave the country by the Czech government. This was called the Beneš decrees. He moved with his mother (who died in 2002 aged 74) and sister to Lauterbach, Hesse. He studied at a gymnasium (second level school) there.

Grünberg received a diploma in 1962 from the Johann Wolfgang Goethe University. Then he studied at the Darmstadt University of Technology in Germany, where he received his diploma in physics in 1966 and his Ph.D. in 1969. From 1969-1972, he did studied at Carleton University in Ottawa, Canada. Later he joined the Institute for Solid State Physics at the Jülich Research Centre, where he became a leading researcher of magnetism until he retired in 2004.

Grünberg made important discoveries with ferrite (iron) and magnetism such as the Giant magnetoresistive effect (GMR) in 1988. GMR has been used in many modern hard drives. Another use of the GMR effect is in magnetic random access memory.

Apart from the Nobel Prize, Grünberg has been awarded with shared prizes in the APS International Prize for New Materials, the International Union of Pure and Applied Physics Magnetism Award, the Hewlett-Packard Europhysics Prize, the Wolf Prize in Physics in and the 2007 Japan Prize. He won the German Future Prize for Technology and Innovation in 1998 and was named European Inventor of the Year in the category "Universities and research institutions" by the European Patent Office and European Commission in 2006.

All content from Kiddle encyclopedia articles (including the article images and facts) can be freely used under Attribution-ShareAlike license, unless stated otherwise. Cite this article:
Peter Grünberg Facts for Kids. Kiddle Encyclopedia.